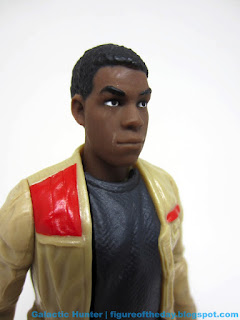 Bio:  A trained warrior desperate to escape his past, Finn is plunged into adventure as his conscience drives him down a heroic, but dangerous, path.  (Taken from the figure's packaging.) 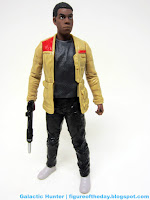 Commentary:  The answer to your question is eBay.   I had to order this Finn (and his wavemates) from Mexico for about $10 per shipped last year, because they never actually showed up in the USA so far as I could tell.  These value channel items are popular in markets in need of cheaper products, so Hasbro doesn't play them up as much here.  There have been three waves, two of which hit the USA so far.  It would not surprise me to see Finn or others get released for The Last Jedi later in the year, but as of this moment I have no idea if this 6-inch 4-jointed figure will ever be sold to American kids.

For what it would sell for here - about $7 - it's killer.  Hasbro's normal 3 3/4-inch figures are about $8, and this one is 6-inches tall but lacks any accessories.  Finn has jointed shoulders, an articulated waist, and a swiveling neck - that's it.  He's basically the exact same size as his The Black Series counterpart with a lighter jacket and a shirt that's a lighter grey.  And he's got no dirt on his shoes.  And his blaster is a totally different color for some reason.  Also it isn't removable from his fist. 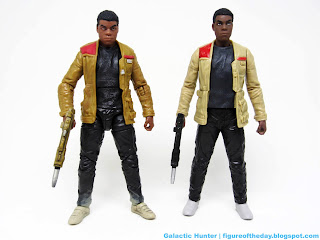 This cheaper 6-inch Finn has darker skin and seems to be derived from the same digital files as the other figures.  A lot of the folds and textures are in the exact same places as on the other figures, just without the cuts for articulation or certain paint applications.    He can't sit, but he can stand as long as his arms are straight.   Once you tilt those shoulders up, he may fall forward. 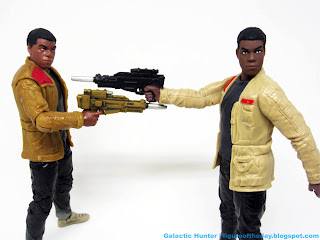 This is an oddity for collectors.  It would be a kid line, but kids aren't going to get it in the USA just yet.   It's basically a statue, although its ability to stand up without too much of a fight is arguably a fantastic feature.  Hasbro left off the silver paint on the jacket and the color may not be exactly what you want, but given the work you're probably going to have to put in to track this down?   It's all moot.  I doubt you'll want to bother to get it unless you're a completist in the format (or it hits US shelves), but for $7 or less it's fantastic.   For $10, you could've had the 12-inch one too, though - so maybe you really don't need this one. 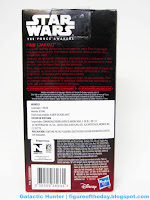 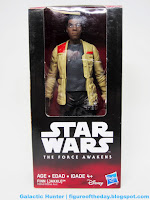