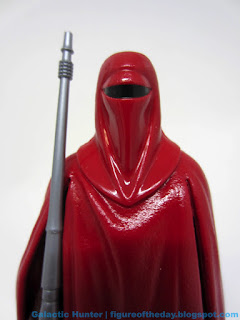 Bio: The Emperor's Royal Guard, also referred to as the Imperial Royal Guard or Imperial Guard, was an elite order of protectors assigned to Emperor Palpatine of the Galactic Empire. (Stolen from Wookieepedia.  Packaging has no bio.) 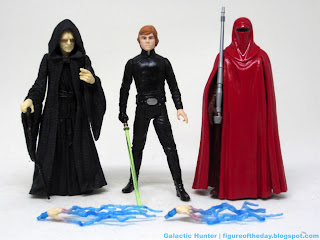 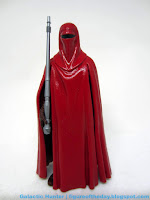 Commentary:  It wasn't obvious when announced, but this Emperor's Royal Guard is a new figure - and possibly the best version so far, as my needs are concerned.  Sure, we had a super-articulated version with cloth robes - but this one has nice plastic robes and stands easily.  With 5 points of articulation, everybody's favorite red bowling pin has returned with an armored body under the robes.   If you pop off the head, you can even see it.   His right hand is posed the way you want - he can hold the Force Pike pool cue perfectly, and the accessory has never looked  better.   Well, it had some black paint before, but this is nice and clean. 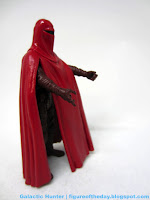 The legs can swing forward, as can the arms thanks to cuts in the robes.  It clearly took the best design cues from previous versions of the figure, without weird tassels hanging off the sides.  The robes wrap around the figure nicely, and the various sculpted folds are pretty much exactly as I would want them.     The texture is decent, with a clothlike visual look on the robes and a glossy, shiny red helmet.  It's lovely.

The only thing I don't like about this figure is the fact you have to get it in an exclusive 3-pack.  I'd cheerily buy a few more of these on individual cards, as this is the army builder you'd want if you're trying to put together a modern set of vintage 1980s toys.   You know, that set of 92-96 that Hasbro will never actually finish.   Ah well.   Go ahead and get this guard, you're going to like it.

Force Link Notes: It sounds pretty much the same as the Praetorian guards - just some whooshing noises.

Collector's Notes: I got mine from Target.  It was on sale for 25% off.

I would believe the VOTC a better stand in, with the cloth robes.