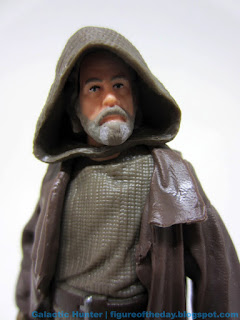 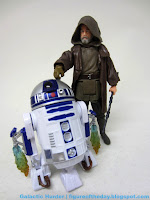 Commentary:  Long-time readers of my ramblings know I feel weird about seeing my heroes age.  We used to get "happily ever after," so Luke Skywalker returned from the great narrative beyond as a Jedi Exile - and as of right now I don't know what that really means.  We know he left, we assume he feels a little disgraced, and this return means the guy who we looked up to and saved the galaxy, destroying a government, couldn't carve out a place for his future, his family, and his followers.  Something awful happened, and this was in part brought on by Disney buying Lucasfilm.   It's bittersweet to get to spend more time with Luke Skywalker, especially since this means he might die, or be a jerk, or in some way differ from 34 years of comics,  novels, and imagination. 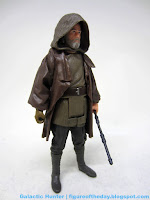 At least the figure is good.   Why Luke needs to change outfits so quickly on his island retreat remains to be seen.

The head looks good with a clean sculpt and a separate piece that makes up his hair. The eyes and beard are sharp, and you can pop out the head from the hood if you like.  His coat is a vest, so if you remove it you have jacket sleeves for the arms on his tunic.   Both wrists are articulated, making this a 7POA figure.  One hand has a glove rather than an exposed robot fist, which also raises questions as to why he wasn't wearing it at the end of the last film.  Vanity?  Was the glove in the wash, yet his white robes were somehow pristine?  The hood's texture and color doesn't match the jacket/robe, so that's strange - and I like how the boots look like a darker version of his Tatooine duds.  I absolutely love the cloth texture on his torso.    I also love that his legs can mostly swing forward cleanly - it's not perfect, but it's good. 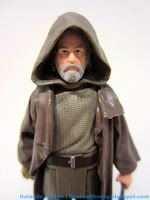 I don't yet know if the hood/robe mismatch is from the movie or not, but if it is Hasbro probably did a good job.  If not, well, it's just weird and confusing.   I like the figure more than I don't, because it's sort of like a Yoda-ish Luke whereas the last one was basically Obi-Wan Lukenobi.   His new staff/cane is intriguing, and we'll see if it is more than meets the eye.  Or just a stick.

Force Link Notes: "How did you find me?" "What do you know about the Force?" "Reach out with your feelings." "You shouldn't be here." It's clearly a soundalike.  Also a smattering of swordy or clangy sounds.

"One hand has a glove rather than an exposed robot fist, which also raises questions as to why he wasn't wearing it at the end of the last film."

The answer is because J.J. thought it would look cooler to have the robotic hand exposed. End of story. Many choices were made because they would "look cool" versus having an actual reason behind them. (see also Ponda Baba & Dr. Evazan in Rogue One)

Hopefully Rian showed more restraint in his filmmaking and fanboy-ism.