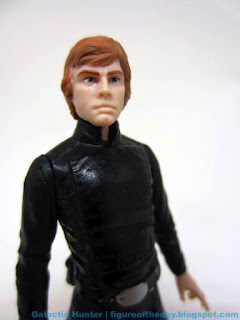 Bio: Luke Skywalker was a Force-sensitive human male Jedi Master who was instrumental in defeating the Galactic Empire and the Sith during the Galactic Civil War. (Stolen from Wookieepedia.  Packaging has no bio.) 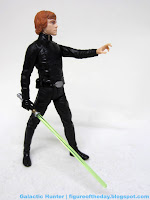 Commentary:  Much like the Royal Guard, this Luke Skywalker was assumed to be a repack or reissue when we first caught a glimpse of it.  It's new!  The figure now has 7 points of articulation thanks to wrists, and the figure can indeed stand on its own.  You're going to have to find the sweet spot, because he's bent in a pseudo-dramatic pose. If you want a Luke to torch his pop, or to throw his lightsaber away because he thinks he's better than you, this is the one.

Luke is pale with hair that looks closer to an action figure in color than his actual hair.  It mostly works.   The outfit is crisp and detailed, with minimal paint.  Mine has a tiny ding on the belt buckle I didn't notice until after I had opened it, and you can see tons of seams on his very tight pants.  There is glossy paint on his boots, belt, and pouch - and I generally never noticed the pouch before.   Hasbro did a good job making sure the figure doesn't need a lot of paint, but mercifully his lightsaber has some decoration to bring it to life.   The likeness is pretty good, he has that cleft chin and does a good  job generally looking more like Mark Hamill than most of the other releases.  I'd say the hair is a tad bushy, but that's mostly just fine. 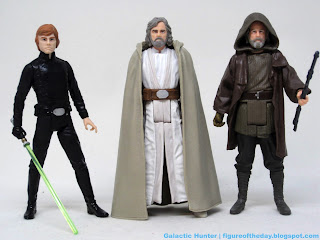 This is a decent Luke figure, but the price may scare you away - $25 means each figure is $8.33, a bit more than an average single figure. Given the lack of accessories for Luke, it would have been nice to have something a little extra in here to make it worthwhile.  It's still a good figure and I'm happy to see Hasbro crank out a few more original trilogy figures as there have been precious few since the Disney takeover.

Force Link Notes: Luke says a bunch of lines from the movie.

Collector's Notes: I got mine from Target.  It was on sale for 25% off.