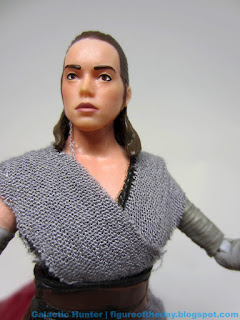 Bio: At long last, Rey has found Luke Skywalker, the last Jedi Master in the galaxy.  Hoping to find a hero of legends, she must unlearn what she has learned as Skywalker challenges her expectations. (Taken from the figure's packaging.) 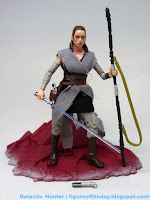 Commentary:  What drove Hasbro to make these plussed-up versions of The Black Series is beyond me, but there was a lot of talk about this buzzing around Hasbro - and Rey is less of a deal than Luke was.  She costs more, and it's possible you've bought the base figure 2-3 times already.  She was sold individually in September, in a 2-pack with Luke at Comic-Con, and now a battle-damage variant of that figure is shipping in boxes.   Toys R Us also charges more - is Rey worth a $5 premium if you've already bought this basic figure before?  No.  But if you haven't?  ...maybe. 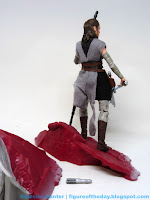 Articulation is the same as the basic release, but there's more paint - this was the first 6-inch Rey with the scar on her arm, for example.  The face is a bit more flushed and determined, with more cloth bits on her costume giving her a more detailed look.   It's a little ragged in spots, as Hasbro doesn't always get cloth quite right, but it's looks decent.   The added grit on her arm wraps looks great, and the head isn't half bad either.   The figure itself is arguably better - but it costs almost twice as much, and it's hard to really say that it's worth the added cost on the merits of deco alone.

The value add comes in the accessories.  A big, two-part Crait display stand is nifty, but is it nifty enough?  You get a decent chunk of plastic, and that's a huge plus. I'd have liked it even more if it integrated accessory storage as Rey has more gear than she can carry.   The red and grey look really cool, giving the environment a distinctive look we don't normally see.  It's almost like the planet is bleeding.  (Heck, maybe it is, I haven't seen the guide books yet.)   They fit together if you're so inclined, but you can display them separately.  Does this sound familiar? 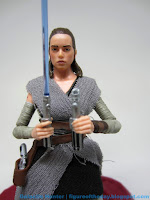 Her gear is pretty good - a bonus metal lightsaber hilt joins a metal blaster, with a normal staff and a normal lightsaber.  The blaster fits in her holster just fine, and she can hold the lightsaber with no real problems.  The detail isn't exactly superb, but neither was the painted detail on the Transformers metal faces over the past year.  I guess die-cast construction really is a lost art - it has a nice feel, but it's not necessarily  better than the plastic equivalent.  You might appreciate the added weight, but it's not like these parts necessarily offer anything the normal figure didn't have - it's not like you're going to notice anything visually different about either piece.  It just feels different when you pose it, and odds are you won't spend a lot of time posing it.   The figure and base make this a worthwhile purchase if you're a completist, but I doubt you're going to feel like you got your money's worth out of this one.   Kylo Ren's deluxe figure is coming, Snoke's is out in force, and I am sitting here hoping that Hasbro only does plussed-up new characters in the future as these are just not all that interesting.  In a line that's already kind of a bore, I'm dying for something new, exciting, and different - not new accessories.

It's still arguably a better piece at a better price than the Centerpiece offerings.