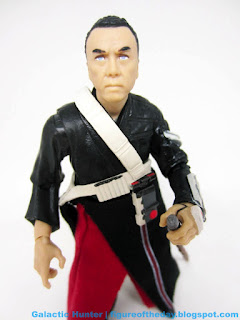 Bio: Deeply spiritual, Chirrut Imwe believes all living things are connected through the Force. Though he lacks Force abilities, his sightless eyes do not prevent him from being a highly skilled warrior  monk. (Taken from the figure's packaging.) 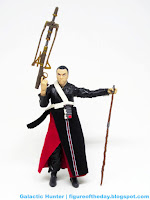 Commentary:  When people walked out of Rogue One, it would seem the characters left a bigger mark than the film itself.  Depending on what you brought to the table, you got a huge kick out of Chirrut Imwe for any of many possible reasons.   Some fans saw him as half of a couple.  Some saw him and Baze as a sort of new R2-D2 and C-3PO.  Others enjoyed seeing a Force religion beyond Jedi.  And of course, more still just loved seeing the classic Zatoichi archetype adapted for space opera.   Not only was he a baadasssss of the first order, but he got to be a decent comic character that got to send up the classic kidnapping convention of throwing a bag over somebody's head.   That alone was worth the price of admission. 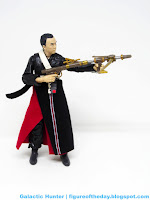 The smaller figure (which I had neglected to review) is awesome, but the big one?  Even awesomer.  (Which, by the way, is a word.  It's also a great album.)   Hasbro delivered the goods here with a fantastic portrait of the actor Donnie Yen, marvelous-for-Hasbro deco, smart use of soft goods, and a better-than-expected Lightbow accessory.  The staff is a staff - two painted silver bits - but the lightbow is pretty gorgeous.  It has two grips, both of which he can easily hold.  The two bits fold in nicely, and I assume - as I don't have all the reference books - it was made by Baze.  According to some early stuff, a gimmick for the movie was that Baze was some sort of gun genius and he designed all sorts of awesome weapons - which is not what I saw in the final cut, so who knows?     The deco is sharp and the parts all move nicely - there's even a joint on the front to rotate the tongs around if you're so inclined. 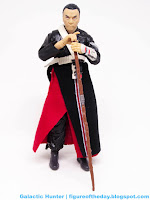 The figure itself is good too!  It looks closer to the actor than some figures, and the skin tone isn't as waxy or translucent as some other figures.  Specifically, Baze.   The blind eye deco is sharp and so is the stripe on the cloth part of his robes.  Everything seems to be in order quite nicely, from the bandolier to the wrist armor.   Articulation is on par with the bulk of the better Disney-era characters, with double-jointed knees and rocker ankles and bend-and-swivel wrists.  He has no problems aiming his bow - which I am very surprised to see - and the mixed media robes hang quite nicely.  The red cloth looks gorgeous, and the black plastic mixes with the black cloth well enough that I don't think you'll be upset by it.     The eyebrows could probably be improved a bit - if you get close, you might notice that parts of the sculpted brow weren't painted.   The funny thing is the figure looks pretty fantastic even with this in mind, so I'm not sure if it would be better or worse with fully-painted brows.   Of course, you probably won't see him in the store anyway, so it's not like you're going to have a chance to find out without buying one online.  (Or so is my guess.)

I like this one a ton - I really dug the characters in the movie and it came with everything I could want, with the articulation he needs, and better than expected accessories.   Hasbro definitely hit the high notes and delivered a figure that meets my needs.   I can't wait to look at Baze!  ...who is also here on my desk.