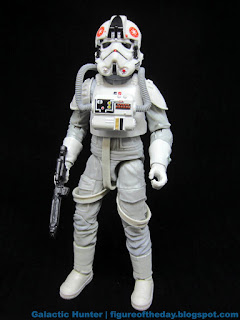 Bio: The Empire's combat drivers are trained to handle everything in the Imperial ground arsenal, but AT-AT drivers see themselves as elite, controlling their massive four-footed assault vehicles in combat against Rebel targets. (Taken from the figure's packaging.)

Commentary:  One of the bizarre things about being a long-term fan of this series is that facts change.  Really!  The AT-AT Driver has been white for as long as I know - people even called it a "white TIE Fighter pilot" at toy shows when rooting through toy bins in the 1980s and early 1990s.   To date, most of the figures have been white - but a few years ago, people started pointing out in prop replica forums that the figure was a darker color.  The light grey looked white in the dark AT-AT cockpit, which means that the vast majority of the Kenner and Hasbro 3 3/4-inch action figures you own of this costume are actually dead wrong.   Aren't we all lucky that they've only done a whole heck of a lot of them?

The figure is nice, and seems designed to be able to sit if you were so inclined - the hip joints are largely unobstructed save for the straps hanging over the legs.  Roughly 27 points of articulation await you, which is fantastic for a costume that you see mostly from behind and only sitting down in the movies.   The level of detail is good, but the paint job is really exceptional.  The helmet and chest armor are packed with little black, silver, and red details that are sure to invite scrutiny and pass with flying colors - provided we don't find out that there are other color strangenesses to consider later.  The helmet lenses are nice and big, and the Imperial cogs are fairly sharp.  There's not a lot going on with the arm or leg deco, but the colors do match nicely and that's what you're going to want.

Bend-and-swivel wrists are a lovely thing to have here, giving the figure a full range of motion to control the giant toy AT-AT Hasbro will never make because it would probably cost $1,000 or more to manufacture in today's economic climate.  Perhaps we can settle for a $300 AT-ST some day instead, although that would be a bit of a centerpiece in any collection and an eyesore in your home.   At least the driver figures would be cool, because you've got things like rocker ankles that you absolutely do not need.  This is how you get your $20 worth - the blaster has a silver marking on it, and the figure has pretty much all of the markings you could want.  Will you ever need to use the double-jointed knees?   No, but it's nice that Hasbro gave them to us.  It'd be nicer if we got a second accessory, but at least we got something useful rather than absolutely nothing like certain droids I could name.

Email ThisBlogThis!Share to TwitterShare to FacebookShare to Pinterest
Labels: AT-AT Drivers, Empire, The Black Series 6-Inch, The Empire Strikes Back