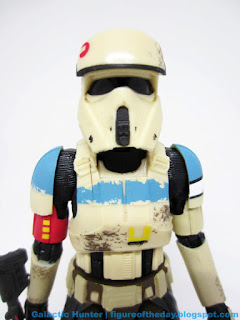 Bio: Specialist Stormtroopers stationed at the top secret Imperial military headquarters on Scarif, Shoretroopers patrol the beaches and bunkers of the planetary facility. (Taken from the figure's packaging.) 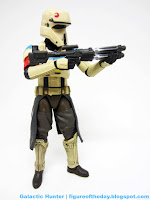 Commentary:  Beach Stormtroopers?  Yes.  The non-exclusive Scarif Stormtrooper Squad Leader brings us one of three Shoretrooper armors, and this is a good one.  There's a lot of variation between the styles, which is a huge change from the Sandtroopers, Clone Troopers, and whatever else you've seen. The colors are great - one of my co-workers is collecting the various flavors of Shoretrooper and she's right to do it!  They're wonderful.   This Squad Leader has the best 6-inch deco on such a trooper so far, with the figure giving your old favorite Stormtrooper a real run for its money.  Especially when you factor in inflation! 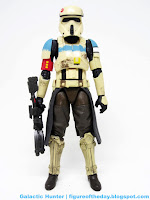 The figure is cast in a sandy brown plastic with dark brown pants, matching shoes, and some wonderful battle damage.  It's not Hasbro's best, but maybe second best.  (Look, I loved those Revenge of the Sith Clone Trooper scuffs and marks.)  The figure is retooled slightly from the exclusive, non-leader version - note the distinctive belt and kama!  The deco adds blue to the chest and shoulders, plus a fancy yellow "U" on the chest.  The mud splatter looks good, as do the painted vents on the figure's back side.   The distressed blue striping is sharp, and the shins are messed up just a little bit - it does a good job bringing out the sculpted detail while also hinting that this trooper spent some time in the water.

Articulation is good - he has no problem double-gripping his rifle, and there's cool silver wear-and-tear on it too.   The leg articulation is good too, although he won't be doing much sitting thanks to the plastic skirt piece.   The rocker ankles are conducive to all sorts of poses, and thankfully they're solid enough to keep him upright.   It's good.   It's not perfect - it's hard to do perfect at this scale at mass-market price points - but the paint applications are nice and clean, the colors are vibrant, and it's a cool design.  I hope there are more things like this in the Lucasfilm playbook, because I am so bored with white troopers at this point.   Color and variety are good, even if it's color on top of earth tones.