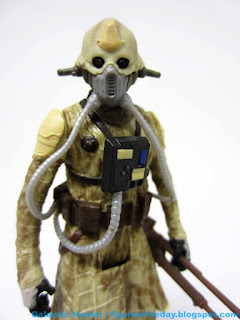 Bio: Edrio Two Tubes is a mercenary pilot who flies alongside his eggmate, Benthic.  They share the nickname derived from the breathing apparatus that allows Tognath physiology to process oxygen atmospheres.  Edrio's native world of Yar Tonga was conquered and occupied by the Empire, forcing him to flee as a refugee.  With a desire to strike back at the Empire, Edrio and Benthic have allied with Saw Gerrera's movement on Jedha.  (Taken from the figure's packaging.) 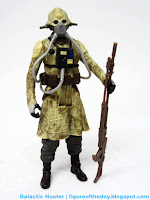 Commentary: Hey, something new!  Rogue One has some life left in it with Edrio Two Tubes.  This alien was pretty cool in the movie, bringing back some of what was missing from some of the aliens in the last movie - that is, vaguely recycled bits.   The chest breathing gizmo greatly resembles that of a Rebel pilot, and we see a bit more exposed skin than we got out of some of the aliens from the last movie.  It's cool to see a head - or at least part of it.  He has five points of articulation, which you probably knew, all of which move surprisingly well.  The legs have no problems swinging forward.

I'm really fond of the sculpting and deco here.  If you get really close to the head and squint, there's a fantastic texture that's very subtle.  The outfit is similarly detailed, with lots of folds and creasing giving some sense of movement and life.  To top it all off is a nice wash, bringing some authentic desert grime to the figure - just the way you like it.  I love the boots, I love the gloves, everything about the figure itself came through pretty much perfectly except for the tubes and rifle.  Why?  They're clean.  It sort of stands out on an otherwise outstanding example of Hasbro's 3 3/4-inch craftsmanship. There are all kinds of stitches on the clothing, with small details sculpted in the back of the head too.   Hasbro didn't skimp on the small stuff, as there's a perfectly textured scarf (I think it's a scarf) around the neck painted a different shade of brown.  Everything here looks sharp, but it's not dark enough.  I need to rewatch the movie to confirm if it's accurate, because at Comic-Con there was a Two Tubes costume that had the jacket identified as Benthic's (in the DK Star Wars Rogue One The Ultimate Visual Guide), with the breathing gizmo labeled as Edrio.  If we assume the book is correct, the figure is good - it could just stand to be a bit darker.

If you want a Two Tubes  brother, you've got one choice - and Hasbro did a bang-up job with it.  It could be more dirty, or a shade darker, but from most reference it would appear that the costume and gun are correct.  This is what you generally want... perhaps Hasbro will reissue it with slightly different deco down the road.  The way things are going I'm not optimistic we'll ever see his brother.  After all, we got Ellorrs Madak in 2001.  We still haven't seen Baniss Keeg.  We got Pax Bonkik in 2007, and we have yet to see a figure marketed as Trax Bonkik.  It's a conspiracy!