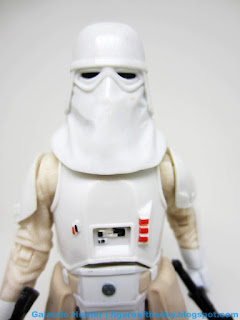 Bio: Snowtroopers are stormtroopers trained for operations in arctic conditions and equipped with specialized gear to protect them against cold. (Taken from the figure's packaging.) 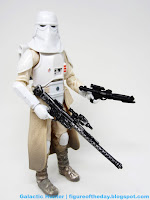 Commentary:  As a kid I was pretty fascinated by masked and helmeted characters.  The Imperial Snowtrooper was a favorite, mostly because it was so strange - a helmet with some sort of cloth mask, and a waistcoat for some reason.  While being a mix of soft and hard armor, the helmet also resembles the garb of a revolting part of what most hoped was America's past, giving a subtle air of disgust for the bad guys.  Interestingly, kids and adults would go on to embrace Darth Vader and the agents of the Empire in a pretty big way as fans, collectors, cosplayers, and more - no matter how evil you are, fans are a forgiving bunch.

The classic Snowtrooper design is here, with Hoth Battle Gear dirtied up a tiny bit.  I've always found this odd - it may be accurate, but the old Kenner figure is in my head and as I grew up in the desert, I associate snow with being white, pristine, and not the slushy mess caked on his boots.  No, because I didn't see that until I went to New York for Toy Fair in my 20s.  (Thank you Mike Sullenger for the disgusting experience.)   The color on the boots is exactly what the frosty street sludge looks like when it gets near the pure white snow, so Hasbro did a nice job matching that gunk.   The creamy body glove looks good, as do the glossy white hard armor  bits.  The helmet does not have a removable head underneath, but it does sport two points of articulation around the neck to get some decent poses.  Its various lights and switches are painted nicely, and its backpack has more deco than the original Kenner figure.  It's nice, is what I'm saying. 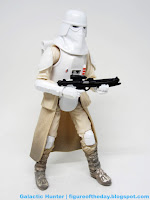 I love the guns. They're fantastic.  The short stormtrooper blaster has a silver bit painted on the side, which is lovely.  The rifle is better - it's molded in black, with painted silver that give it the look of a used weapon with black paint worn away with time and use.  Both fit perfectly in either hand, and the arms are articulated to allow limited two-fisted posing.  It's not perfect, but bend-and-swivel joints have their limitations.   Thigh-swivels, rocker ankles, and bend-and-swivel wrists are all here for your enjoyment.   It's worth  noting that the figure has a codpiece that sticks out when you swing the legs forward, so don't do that.  I'm not a huge fan of that bit of engineering, but it's molded to the belt which in turn is molded to the rubbery kama hanging over his butt.   You gotta cover your butt.

For the price, it's great - I assume you'd love to army build him if it showed up in stores in good numbers.  The figure was part of a great wave of six new figures sold online last year, and they're consistent sellers.  The wave was packed with fan favorites new and old, with the Snowtrooper being an oft-requested stooge of the Empire - all but required on any collector's shelf.   The figure excels in this format, with great sculpting and paintwork.  It doesn't get to innovate, but it does give you what seems to be the logical extreme of just how good this format can look today without raising the price.  Nicely done.

Email ThisBlogThis!Share to TwitterShare to FacebookShare to Pinterest
Labels: Empire, Stormtrooper, The Black Series 6-Inch, The Empire Strikes Back

My name is Anuj Agarwal. I'm Founder of Feedspot.

I would like to personally congratulate you as your blog Figure of the Day has been selected by our panelist as one of the Top 50 Action Figure Blogs on the web.

I personally give you a high-five and want to thank you for your contribution to this world. This is the most comprehensive list of Top 50 Action Figure Blogs on the internet and I’m honored to have you as part of this!

Also, you have the honor of displaying the badge on your blog.