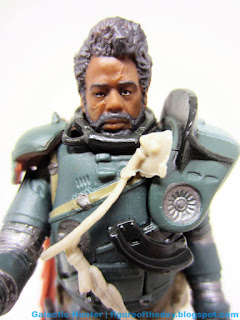 Bio: A battered veteran of the Clone Wars as well as the ongoing rebellion against the Empire, Saw Gerrera leads a band of Rebel extremists.  Saw has lost much in his decades of combat, but occasional flashes of the charismatic and caring man he once was shine through his calloused exterior.  Gerrera is bunkered on the ancient world of Jedha, coordinating a prolonged insurgency against the Imperial occupation.  Saw's ailing health has not withered his resolve to fight.  (Taken from the figure's packaging.) 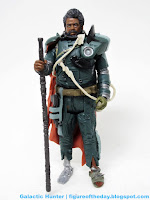 Commentary: Hey, something new!  Rogue One brings Saw Gerrera to life now that the main line is about over.  If you saw the movie as well as his animated appearances, he's an interesting character with a distinctive way of speaking - in the movie.  His cartoon appearances were perfectly nice, but his accent and very weary delivery is something that the likes of SNL picked up on quickly.   This was a distinctive voice if ever there was one, with a pretty fantastic character design based on one of two looks from the movie.  Funko picked one that didn't see much use, Hasbro lucked in to the hairy not-quite-Darth Vader cyborg pirate look.  This is a good one. 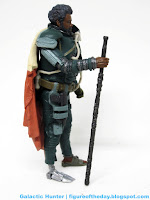 Saw's outfit is pretty great - it's true to the movie, but I'm still left wondering why a man sealed in armor, who has lost a foot, who can barely breathe, has decided to keep a pretty nice cape on his back.  Capes make little sense, but it would seem they're still very popular even in the new era of movies.   The patten on the back is painted nicely, and the sculpting is wonderful.  The same can be said about the green armor, which has a good amount of sculpted detail but minimal painted detail.  His costume has buckles and rings, none of which are painted in a color to set them apart from the fabric.  Given the size this is mostly OK, because you'll also note lots of paint on his remaining flesh leg with a busted-up sandal and what appears to be some sort of cuffs. I love that they kept the rubbery breathing tubes and mask, although it'd have been great if it were in clear plastic*  or had a mask that you could move to his face.  It's pegged in place, so it doesn't seem to be going anywhere.  I love how the head and hair turned out - it's grizzled with a hint of one eye being weakened thanks to his active lifestyle.  I assume a 6-inch scale one would have more grey in his hair and a more scarred-up face... but there isn't one.

While I would have loved to see more paint on this figure, what we got is pretty good for the current crop of 3 3/4-inch figures.  The blaster fits in his hand or holster, and the cane fits in his hand without a problem.  There are a lot of painted details on the upper body, and the coloring is very distinctive.  Star Wars doesn't have a lot of greens.  I love how this figure turned out, and that we even got him in the first place.  I'd love to see what a deluxe version might look like some day, but for the time being I'm very happy to have this one.   I don't assume we'd ever see another one from Rogue One, so I hope you all bought this one while the getting was good.  I don't see a lot of him in stores and he's been out for nearly a month, so get while the getting is good.

* - Maybe not. Clear rubbery plastic is prone to discoloration.  As a wise man once said, Star Wars fans are never happy.