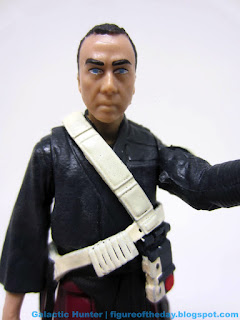 Bio: Deeply spiritual, Chirrut Îmwe believes all living things are connected through the Force. His sightless eyes do not prevent him from being a highly skilled warrior. Though he lacks Force abilities, this warrior monk has rigorously honed his body through intense physical and mental discipline.  (Taken from the figure's packaging.) 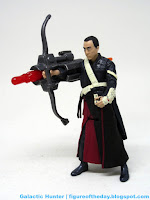 Commentary: This is a good one - and for a time, was surprisingly easy to get.  One of many surprises in Rogue One, Chirrut Imwe brought the blind martial artist trope to Star Wars.  Well, the first explicit nod to it - Han Solo got a taste of that role in Return of the Jedi, but it was generally more slapstick in nature.  Chirrut got to be funny, but generally for other reasons.   Like the larger figure, he has a great head sculpt, a generous amount of armor and bandolier bits, and blued-out "blind" eyes.   Also surprisingly, his lightbow accessory is actually inspired by something on screen.  This wasn't necessarily obvious when he came out a full two months before the movie, so the swing-out elements and a decent firing mechanism were a nice touch.

Articulation more or less normal for this era, giving us a figure that reminds me a lot of the very first 1984 mail-in/POTF Anakin Skywalker.  The robes are cut down the middle, allowing his legs to swing forward.  Due to the bulk of the costume, you won't be getting him to fit in many vehicles.  Due to the lack of vehicles in this line, odds are this would never be a problem.   He can easily hold his staff - which is painted in a couple of spots - in either hand.  The bow clamps on his hands without too much fuss, but gravity is gravity and it's not like you're probably going to have him do a lot of aiming unassisted by hand.

I love the robe sculpting, I appreciate that they used extra tooling to separate his left hand from the sleeve, allowing both to be molded in plastic.  For a brief time I saw this figure sitting a lot, which is a shame because he's a great character and an above-average figure.  If you saw this movie and didn't like Chirrut, I don't even know what I'm supposed to say to you.  He was cool, the movie was fun enough, and Hasbro did a really good job with this figure given their current direction from whoever directs these things.  I know a common argument going around is "Wouldn't this be a better figure if it were completely different?"  Sure.  But it's not - this is the figure.   And it's a great figure given the circumstances surrounding its release, so do yourself a favor and grab it before Hasbro stops shipping them and someone charges you $50 for it on Amazon.  It's not going to be today, but I don't assume Hasbro will keep Rogue One characters in circulation once the line reboots for The Last Jedi come September.