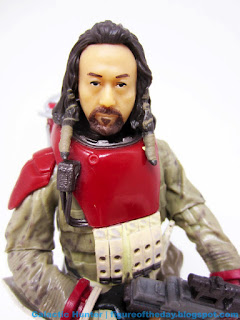 Bio:  The harsh reality of his Imperial-occupied home world has hardened Baze Malbus into a pragmatic soldier and a crack shot with his heavy repeater cannon. His bravado that provides a contrast to the spiritual centeredness of his best friend and moral compass, Chirrut Ímwe. (Taken from the figure's packaging.) 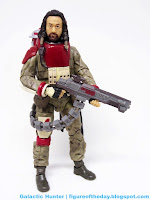 Commentary:  R2-D2 needs C-3PO and in Rogue One,  Chirrut Imwe needs Baze Malbus.  The two former members of a Force-related temple on Jedha seemed to be hanging out in a slum for reasons we never really saw on the big screen.   He's basically as good as any other 6-inch action figure from Hasbro, with a skin translucency that's different than Chirrut, but quite good.  You'll see a little more light passes through Baze's face, unlike Chirrut's.   This gives him a slightly softer look, not unlike the Vaseline-lens used in old Hollywood movies.   Considering he's a harsher, tougher character it's certainly an interesting design choice. 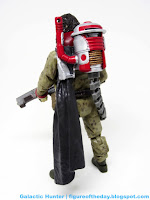 He's good - the head sculpt looks more than a little like him, thanks mostly to the recognizable hair and beard.  It's one of the better Hasbro beards, and the hair turned out quite nicely.  The eyes and eyebrows are good, but they're not as good as Chirrut's.   In any other wave, this would probably be the winner - it's just tough to compete with something as good as his predecessor.  The costume itself is dang near perfect as you can get, with a suit that looks like it was made out of junk found around IBM's dumpster in 1976.   This is what you want.   The off-white plastic bits on the weathered, body suit just plain work, and the shiny red armor bits are pretty great.  They're not all consistent in color, but it doesn't seem they were exactly the same in the movie either.  There could stand to be a bit more weathering on the figure and a hint of grey in the beard, but given the size it's probably better to understate than overstate these details.  Stuff vanishes as you go smaller. 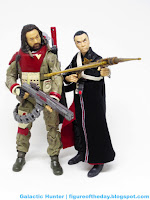 Articulation is normal.  Actually, it's great - but if you're doing the same thing for several years, "great" is no longer superlative.  Consistency is good with bend-and-swivel wrists, rocker ankles, and enough arm movement to allow for double-gripping of his massive cannon.  The backpack fits nicely, and what's even more surprising is that there's a small accessory that plugs in to the back of his belt.  What is it? I don't know.  But it looks neat, and I assume loose examples of this figure will be missing this piece later.

As Baze's one and only costume, it's unlikely you'll ever see a variant costume for him ever again unless he cameos in the Han Solo side story movie.   Maybe we'll see a deluxe deco version some day, but again, I doubt it - I think this duo is only going to become more popular as the years go on, so be sure you don't skip them.   We've yet to see what kind of attention span the new Hasbro has under Disney's lead, but I have yet to see any evidence that anyone is interested in looking back with three or more new movies on the horizon over the next few years.   Thankfully Baze is well-constructed, so I don't expect him to fall over on your shelve before these movies hit home video.