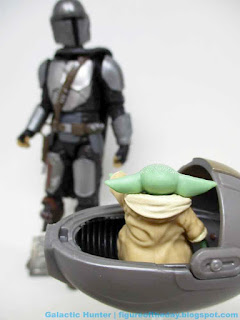 Bio: The Mandalorian as a battle-worn and tight-lipped, a formidable bounty hunter in an increasingly dangerous galaxy who finds a mysterious alien pursued by bounty hunters on behalf of Imperial interests. (Taken from the packaging.) 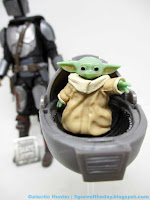 Commentary: When I first heard they were doing The Child - also known as the kid, Grogu, Li'l Sprout, Greenie the Seasick Genie, the Great Gazoo, Lucky, the Geico Gecko, Gex, Irish Gizmo, and Frank - I assumed we'd get more figures like this one. At his proper size, this 1 1/2-inch figure is tiny. Not quite Fighter Pods-tiny, but certainly Mordles-esque or sub-M.U.S.C.L.E. in size - so I was expecting Hasbro would release them as non-articulated slug figures to convey various poses or moods. So far, The Black Series has had three unique versions of the Child - one of which sold solo, the other was a head in a bag. Do you get your money's worth? Kinda. 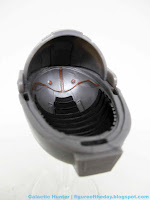 The previous version of this character had a full body and jointed arms - this one has a jointed neck and jointed wrists. That's it. It's not the best fit for the end-of-season-1 Pram we get, but it's a perfectly nice figure for Mando to tuck under his arm or to have tugging at his boots. The sculpt is pretty much the same as before, with hints of wisps of hair painted on the back of the head and nice, big black eyes with tiny whites around them. There's a hint of rosy cheeks and pink ear interiors, with the neck and the ends of his sleeves painted a lighter brown color. The feet under the figure are painted, but there's no foot peg. That's kind of a shame - I would've loved the hover pram to have a peg to plug the little guy in the right place.

This is not better than the figure you bought for $10 by himself (with frog, lost knob, and forgotten bowl) but it is different enough to warrant some attention. You can probably recreate this 2-pack Child's pose with that figure just fine, so I have no real reason to recommend this one other than it's a nice part of a set and his accessories make it very worthwhile. 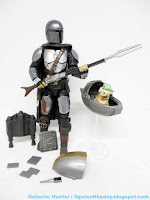 The selling point for this figure - and arguably the set - is the hover pram from the end of the first season. The form is right - it's smooth and new, greyer, but the deco doesn't seem right. The stripe down the middle doesn't quite match what it seems we see on screen, but it's also the only collectible of the pram as seen in Season 1 Episode 7 that I can find and there's very little reference of it online. So they made a good one - the front snaps on nicely, and there's plenty of interior painted detail that you will likely never ever need to see. You can snap the lid shut with the kid inside, and everything fits together quite nicely. I'd be up for a redeco of this later.

This figure may be essential - if you don't have one, this is a good one. If you've already got the single-pack full-Beskar Mando and a single-pack The Child, you'll be wanting this one mostly for the accessories and unmasked Pedro head. Otherwise, it's more of the same. If you're a Mandalorian fanatic - and let's be honest, most of us are - this is a set you should be hoping Target reissues again because the market could probably use a whole bunch more of it to meet demand for everybody's favorite single space dad since Ben Sisko and for some reason Jake.

Collector's Notes: I got mine my pal Scott since Target was always out. Thank you Scott!