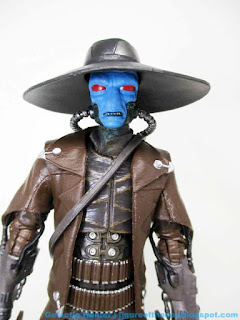 CAD BANE (without, or with Todo 360 as a Hasbro Pulse Exclusive)
The Black Series 2020 Line Look Yellow Star Wars: The Clone Wars Packaging Deluxe Action Figure
Item No.: Asst. E8908 No. E9359, or the exclusive is No. E9634
Manufacturer: Hasbro
Number: #06
Includes: 2 blasters, bag, and hat; exclusive version includes Todo 360
Action Feature: n/a
Retail: $19.99 or $29.99 for the exclusive version
Availability: October 2020
Appearances: The Clone Wars
Bio: A ruthless bounty hunter from the planet Duro, Cad Bane was the preeminent blaster-for-hire in the galaxy during the Clone Wars. No quarry was too dangerous for Bane, if the price was right. (Taken from the figure's packaging.) 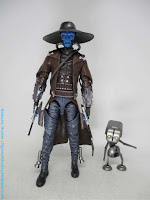 Commentary: I put off reviewing a lot of exclusives, but this one was also a standard release. Cad Bane can be bought with or without Todo 360 - I got both, because I'm nuts. The Clone Wars has gone from a thing old fans ignored to a thing young adults adore, which is one of the reasons you're getting so much The Clone Wars stuff in this format. Kids liked it! And old fans are dying off, quitting, or just not spending money as freely. There are now over 40 years of fans, and to put things in perspective my fellow olds should look at Star Trek in the 1990s when Playmates Toys took a couple of years to do Kirk and Spock and friends, instead focusing on the then-hugely-popular new syndicated Star Trek: The Next Generation. It doesn't mean the original thing isn't cool anymore - but you can kind of get why you want to milk the new thing when it's hot.

This is a good 7-inch scale figure. The likenesses of cartoon figures are hard to pin down, but thankfully a rubber mask is a rubber mask, and a skinny alien is a skinny alien. Other than some more painted and sculpted detail, Cad Bane looks pretty much exactly like his animated model counterpart. If anything, Hasbro filled him out a little here - he was more gaunt on the cartoon, with bigger eyes. Aside from that he looks pretty much exactly like you would have imagined with his wide-brimmed hat, working holsters, Boba Fett-like gauntlets, and boot rockets. 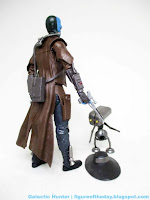 The blue skin if vibrant and the costume is a bit less saturate than the animation model, which is what you want in your scum and/or villainy. He has the kind of articulation typical to the later 2020-and-beyond figures with thigh cuts hidden by his boots, rocker ankles, jointed rockets, and he just serves as a shining beacon of how to hide articulation in your character design. Nearly every joint is hidden in a fold in his costume, which makes this seem like it could have been designed as a toy first. Hasbro did a magnificent job translating it to a sneering plastic figure, with faux leather deco on the plastic and some worn bits on the pants. It's really quite incredible, but I assume there's a certain kind of fan who is absolutely adoring this figure while a lot of fans are going to eventually realize that they missed it. They will not be happy. This is a great release.

Since the character doesn't seem to be dead - at least, not yet - it would not entirely surprise me to see him show up in a streaming show or a new animated program. This is a figure that stands out as one of Hasbro's very best aliens, and serves as a reminder of why they should make more of them. They do such a good job! It's a shame we don't see more, but it always helps when it's a regular recurring popular bad guy. If you have the chance, get one.

Collector's Notes: I got the exclusive one from Hasbro Pulse. I got the regular one from Entertainment Earth. I literally cannot tell the difference.