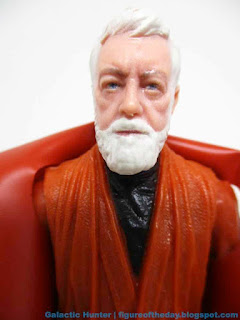 Bio: Obi-Wan Kenobi was a Force-sensitive legendary human male Jedi Master who served on the Jedi High Council during the last years of the Republic Era. During the Imperial Era, he adopted the alias Ben Kenobi in order to hide from the regime that drove the Jedi to near extinction. (Taken from Wookieepedia. Package has no bio.) 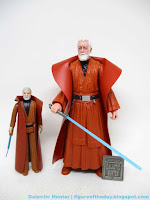 Commentary: I was actually thinking of asking Kenner to do Kennerian Greedo, but clearly they had much more in mind with this Ben (Obi-Wan) Kenobi figure. I'm sure younger fans look at it with the same derision I gave to 2020's "holiday" repaints, but with the retro Kenner packaging and 1978-style deco this is a gem. And Hasbro can probably go back to the well and sell us several more figures in the same style. The 2016 figure returns, this time with a red/orange coloring, a vinyl cape to replace the cloth one, and a box over his anniversary-style cardback. This is the kind of thing they should keep running because it's a wonderful idea - but sometimes it won't appeal to everybody.

As a kid I did not like the vinyl capes - I didn't want to crease them, and they got in the way of fitting the figure in the Landspeeder. Here, there's a lot less to worry about - the figure's body has effectively static legs thanks to the long robe skirt piece. Sure, there are joints there, but what good will they do you? None good, that's what. As such the big sheet of vinyl wraps around the figure nicely and serves as a surprisingly good accent for this 6-inch figure. There's very little paint on the body, no doubt saving Hasbro a few bucks and helping to keep prices low. The vinyl doesn't really get in the way of the arm movement either - it's just as good as it was with a cloth robe, except now you can actually see the figure. One of the odder touches is that the figure's pants are painted dark brown, but they're effectively hidden by the robes. They probably could have saved more money molding everything in color, but opted not to for reasons I can't quite grasp. Good for them, I guess? It's a great match for the figure I grew up with in the 1980s. 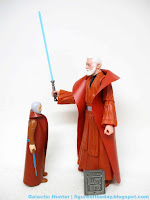 The head is, to say the least, a weird mixture of the old and the new. The white hair doesn't quite match the film, but it does resemble one of the old toy variants and it has some overspray problems just like many (but not all) of the original Kenner figures. You can see a lot of the face painted beyond the hair, and I am choosing to assume Hasbro did this intentionally. What makes it odd is that the face - the eyes, specifically - make use of the Photoreal deco Hasbro has been crowing about over the last few years. I like it, because it looks better - but it also doesn't look quite as much as a vintage action figure with beady little dots for eyes. I assume it will also raise demand for an actual Photoreal Obi-Wan Kenobi redeco using the original movie colors. It's a neat piece, to say the least, and Hasbro should be commended for finding a way to sucker me out of $20 in a way so clever I won't complain about it.

Rounding out the set is a blue lightsaber. The blade is a blue not unlike the original, but the hilt is just silver - not like the original. You'll remember the 1978 Obi-Wan figure had a hilt embedded in his arm in a plastic color that matched the sleeves. It's the same great movie sculpt we got before, but I think I would have preferred they make it look intentionally uglier. But that's me - thanks to the realistic face, painted belt buckle, and hilt, it strikes me more like a Marvel Comics deco (flat colors, good faces) than the update to a Kenner figure. But who cares what I think? It's gorgeous.

The day I got mine I checked on Amazon to see what I paid for it - and saw it was sold out and shot up to about $90. Don't pay $90. Demand Hasbro make more for Amazon, so everybody can make more money, and not just the scalpers or flippers. (And make more of a slightly different Kenner Boba Fett while they're at it.) I really love this figure, even if it is just maybe 20% fancier than it needed to be to scratch the Kenner itch - but it's still great. You should still get it if you can do so at a reasonable price. He's worth it.