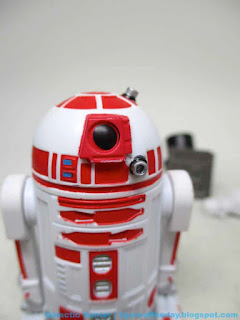 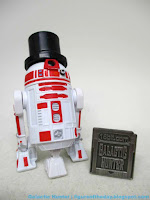 Commentary: More droids, more problems! Seemingly not based on anything in particular, this R2-Series Astromech Droid with a White Dome with Red Panels looks fine. It's a white dome - which we don't get a lot from Hasbro or in the movies - with red panels, which we don't see a lot of on R2-style round domes.

The 2015 red astromech body is a bit different than the 2012 model - you can see different red panels are painted, while other panels are now unpainted. The back has more panels filled in, and the deco is a little more red than the slightly orange-tinted 2012 model. I like it - it's different enough so that those who are in the know can tell the difference between release years. Unfortunately, other than the six people who care about such things, nobody else will probably ever notice. 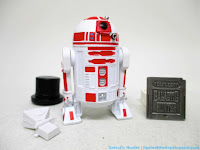 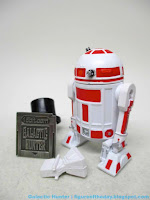 2015 red legs have extra red boxes on them - you can't miss them. The sides and the front/back area have little panels, while the central white leg is completely undecorated.

The dome does exactly what you would hope - white plastic with nearly every panel filled in red. No bald spots here! There's a subtle orange circle under the eye, and a couple of similarly subtle orange lights on the back. A more contrasting color would have worked better, but it fits just fine. A few elements are decorated silver to keep things interesting, giving this R2 unit a look of a snowman of sorts.

While this has no place in a collection other than as one of your many, many droids, it's a neat one. I like that they changed up a few elements so it's just not the same old bodies again, and the white domes are a nice change of pace. You probably missed this one and didn't even realize it - so you're welcome/I'm sorry for showing this one to you. It's not flashy, but it does look like a perfectly nice off-the-assembly-line robot figure. Who knows - maybe it will have a cameo on a future TV project. Or movie. They've done so many designs I expect at some point Lucasfilm will just start pulling from the toys for reference!