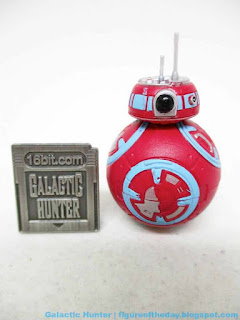 Bio: All different types of droids populate the Star Wars galaxy. Each droid is different and has their own unique personality and colors. A maroon and turquoise BB Astromech unit, CB-23 serves the resistance as Poe Dameron's co-pilot. May the Force be with you... and your Droids! (Taken from the figure's packaging.) 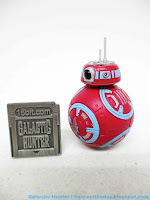 Commentary: With the parks largely closed and my pals unable to go places, I got CB-23 when a damaged cardback showed up on eBay. The price was right. This uses Disney's BB tooling, but gives us a new head and the first and perhaps only release the robot will ever see. It would not stun me if this is the last time we ever get a figure from Star Wars: Resistance either.

By 2021 nobody needs nor do they want another BB droid. I think everybody got over the sequels for a while, and right now want to wallow in the post-Return of the Jedi splendor of The Mandalorian. For those of us who just need everything, this little robot is a nice addition to the droid pool since he got a new head. The red head now has a flat silver top with a few wires, lights, and panels I didn't notice when watching the show. It looks like someone customized it. The dome is missing a little yellow box on his left side, but other than that matches the packaging rendering quite nicely with the cheery colors. The unique dome makes this an easy choice to pick up, provided you aren't yet over countless repaints and retools of robots.

The body is largely the same as BB-8 other than the colors, and it looks fantastic. If you pop it open, there's a weighted engine ball inside molded in red with silver highlights. Why did Disney bother to paint something you may never even know you can see? I have no idea. I assume to make you think you got your $13 worth, especially since Hasbro did a series of 2-packs last fall for a mere $9.99 each. There's no weighted ball or removable head, but on the other hand, you got two for ten bucks. 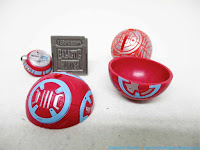 There's not a lot new here other than head and colors, but that's what tends to serve as a good redeco in Transformers. Normally you don't even get a new noggin. I don't assume we'll get a lot from Disney's largely ignored second animated child, despite it being jam-packed with awesome alien designs and some really cool periphery characters. Also, some of the most boring heroes and villains. But we got a handful of neat figures, and this droid is one of the few I was left wanting once the line ended. Now where's Jim Rash: Bird Man, and Neeku?

Collector's Notes: I got this from eBay.