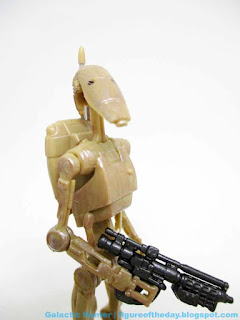 Bio: Battle droids, also known as combat droids, clankers, droid soldiers, or battle bots, were a type of droid designed for combat. Over the years, many different models of battle droid were being utilized by various factions throughout the galaxy. One such faction was the Confederacy of Independent Systems, which used a number of different models of battle droid during the Clone Wars to make up the Separatist Droid Army. (Stolen from Wookieepedia. Packaging has no bio.) 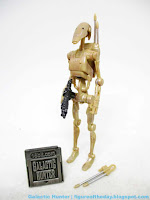 Commentary: Since you're going to have to get used to more reruns, you're also going to have to know a good one when you see it. This Battle Droid is on the fence - an expensive army builder should be brought back! But it should also be improved. It's certainly good enough, with all-new deco and what feels like slightly more rubbery plastic. (At press time, I was unable to track down the 2012 original release in my collection. This is what not getting everything organized gets you.)

The sculpt is nearly perfect with wonderful details matching the films. For safety reasons - and to avoid breakage - these figures are a tiny bit rubbery sometimes. This one is very rubbery - I assume gravity, heat, and time will send them toppling over, even on a figure stand. (You'll need a small doll stand, something with upper-body support, to prevent falling over after a few days/weeks/months.) Having incredibly tight joints might help, but I've seen the actual leg bend of various thin-limbed droids over the years even when placed on a figure stand. There's no fighting the forces of physics, so you have to work around them and spring for tiny doll stands. While it's true this figure has better proportions, more authentic detailing, and improved articulation over the droids of 1999, the 1999 class was better at standing. You can't have everything - they have to fudge something in order to make these figures work. Packaged collectors should have no problems with this one, but hoarders troop builders may want to use other molds to build up their army. 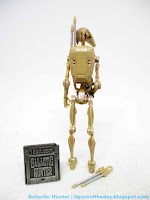 The deco is new - and almost glittery. There's a silver scrape print finish over the bony "metal" coloration, and it reads as more sparkly than battle-worn. One of the eyes on mine was a smidgen off, but that's not the end of the world - if anything, a slightly off-model droid works well in an army situation. I prefer the original 2012 deco, but I'd still say you should get one of the new ones to build out dioramas. It's the kind of different that makes buying all the flavors worthwhile, because any time you can make a "different" trooper it's effectively a new figure.

Much like the original, you can swap out the backpack for an antenna pack, or have him crouch down in a ball to fit in the giant Hasbro MTT that got expensive when you weren't looking. This, friends, is why you can't always wait for clearances. If Hasbro experiments with materials I have no doubt they could make a better Battle Droid, but I don't know if - oh, he fell over while I was writing this. Well, that's why you need to get some sort of support under the arms. It's not great for openers, unless you want him crouched down, or have him supported, or have him in a vehicle. He's just not stable. ...he fell over again.