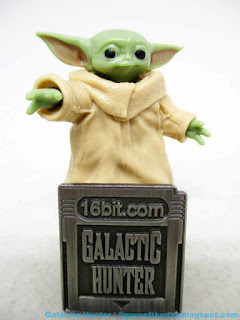 Bio: A mysterious alien pursued by bounty hunters on behalf of Imperial interests. (Taken from the figure's packaging.) 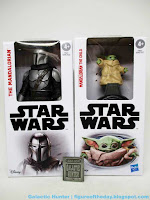 Commentary: I am semi-enamored with the slow-drip "value channel" line since it showed up overseas in 2015. (That Darth Vader has been in circulation ever since!) As far as I know there are three figures which never got released in the USA - the Death Trooper from Rogue One, the Alden Han Solo from Solo, and a Chewbacca also from Solo but sold around The Last Jedi in Europe. The line has been quiet since then, but now you can find The Mandalorian and The Child at a Walmart near you for the mind-bogglingly low price of about $4.96.

While some of you are rolling your eyes at these, I would ask you to reconsider - the first The Black Series C-3PO was $20 and extremely stiff, and the discount value one was $7 and just a little stiffer. Sometimes you want the best, and sometimes you may just want to feel like you got your money's worth - and these figures do that well. This take on The Child is similar to - but larger than - Target's exclusive The Child [FOTD #2,797] is about one inch tall, this one is 1 1/2-inches tall. The articulation is the same - and it's arguably much cheaper, given there's no $15 upcharge on Mando here. 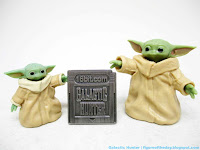 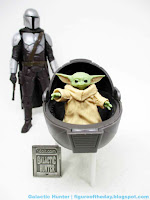 The figure's detailing and sculpting is about as good as the rest we got from Hasbro, with articulation that is arguably The Black Series quality because Hasbro really dropped the ball on that Target exclusive one. The $5 kid has wrists and neck - and that's it. The body is unpainted, the feet are unpainted (but you don't see them anyway), and the head is painted pretty adequately with black eyes, pink inner ears. The cheap figure's neck has a better range of motion than The Black Series releases too. Given that The Black Series The Child figures are fairly difficult to find, even at a slightly larger size, this will probably serve as a perfectly fine substitute for a lot of fans - particularly ones that just see it and buy it. He doesn't do much, but neither does that last The Black Series figure. 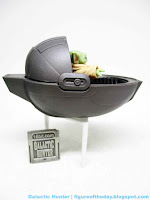 Our terrible green child comes with a good - but not great - hover pram, too. It's also much larger than the previous version, and also comes from the season 1 finale version of the prop. This means it's dark grey, with a painted padding inside. There's no retractable dome part, so you can just place him in there if you want. There's no hover stand, and he just stands or lays in there. The detail is sculpted nicely, and it's a perfectly nice desk toy or something for kids.

I assume most collectors won't look at this, but it's a startlingly great product for kids and fans. This sort of thing is stuck at the Walmart checklane (and potentially food and drug and value stores like Dollar General, Big Lots, or whoever stocks them in the USA anymore) but would sell like crazy on the toy aisle by virtue of the fact that there really aren't many action figures to be had at stores these days. It is arguably better (and bigger) than The Black Series figure and sold at a discount, but you do lose a couple of paint operations. If you're happy with your The Child purchases, you probably neither need nor want this one too. However, there are millions of fans who have seen this show and have still never seen either of the series leads as toys in stores since they sell so fast. Also this is a reminder that Hasbro can make really good figures at rock-bottom prices... they just usually won't.