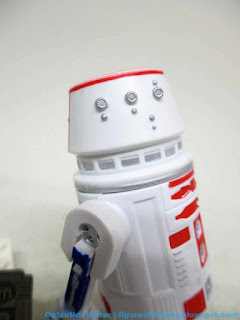 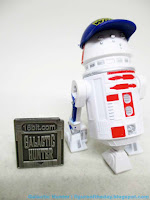 Commentary: The white and red R5-Series Astromech Droid looks a lot like R5-D4, and also the Red R5 Unit Astromech Droid [FOTD #1,897] from way back in 2012. If I didn't know better, I'd assume it was the same part - but there are subtle changes. Should you care? No. But if you're going for full-on completism, there were two runs, they are slightly different, and the "matching" bodies of the time were also changed.

Unless you're completist to a fault, you don't need this. The dome is similar to previous R5 domes, with the same basic pattern - but this time, it's redder. The 2012 version was a little oranger. I would never know this without a side-by-side comparison. Similarly, the panels are the same basic patterns but slightly different. For example the dome's pie slices on top are a little more sloppy this time, and the silver ring "collar" is now the bottom ring, rather than the recessed area between the two rings. Is this worth buying again? Probably not! But it's different enough that you can take notice of it. 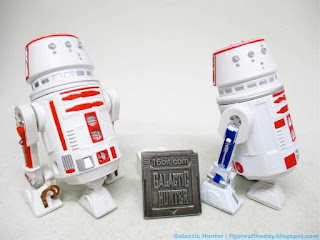 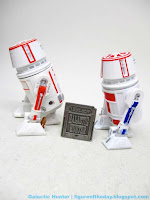 The 2015 body is very different than the 2012 release. For starters, the two vertical panels are unpainted - and a bunch of other boxes are now filled in. The 2012 body has sockets for lower legs, the 2015 release has them filled in. The 2012 body is mostly blank on the back, with a few outlined panels. The 2015 body has five red panels filled in. From where I sit, it's different enough to justify buying it - but I also am now side-eyeing my own completism as there are four $50+ vehicles-with-exclusive-droids at Disney parks that I can't seem to easily get. Do I even need this? Probably not.

To mix things up, this build has blue R2 legs (like R5-D4 in the movie) rather than matching red legs. You can see the 2015 feet have some added silver - a box on the front and back on the plus some sculpted silver greeblies stand out nicely for those looking for something different. A silver anklet of sorts is painted around the foot, and the greeblies around the "shoulder" were smoothed out and removed. There's both more - and less - detail on the new one. It's different, and we like different here. 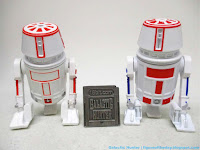 Given the number of Disney astromechs, R5-D4s, R5-D8s, and other very similar droids, I can't actually say it's worth your while to seek out this specific one. I'm reviewing it here just so there's a little more reference that there are indeed multiple versions, but does it matter? Could you even get one now if you wanted one? I have no idea. The lack of names will make it hard to find on eBay and goodness knows what the part bins are like, if they're even still around. For the droid fanatics, you're going to want this one - because it is a different release. For everybody else with dozens (or hundreds) of droids, you're not going to find any reason that this one is any better than the other ones you've got. But it is different.

Collector's Notes: I got this from my pal Shannon who was cool enough to get me a set from Disneyland. Thank you Shannon!