Star Wars Figure of the Day: Day 2,812: The Mandalorian (The Retro Collection) 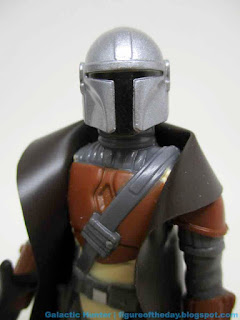 Bio: Din Djarin was a human male Mandalorian who worked as a bounty hunter during the New Republic Era. With his Mandalorian armor, IB-94 blaster pistol, Amban sniper rifle, and distinctive beskar helmet, Djarin was both well-equipped and enigmatic—a stranger whose past was shrouded in mystery to others. (Stolen from Wookieepedia. Packaging has no bio.) 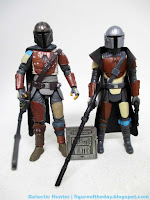 Commentary: This format may be - heck, should be - where Hasbro does all its new characters first. Why? Because errors make them better. The Mandalorian brings us the season one, episode one armor of the figure through the lens of Kenner sculptors ca. 1980-1981. While Grand Moff Tarkan and Snowspeeder Pilot Luke took elements from vintage figures to make something new out of a collage of new and old parts, there don't seem to be any recycled bits with Mando here. The true vintage Kenner house style tended to give us mostly new sculpts with varying degrees of accuracy - so if a "Kenner style" figure had the wrong accessory, or an incorrect outfit, or was colored wrong, I'd have no reason to complain. If you're an old fan, you may recall the class of 1979 being wildly inconsistent with what we saw on film, with the likes of Hammerhead, Greedo, Snaggletooth, and Walrus Man being the poster children for future "bootleg" art figure fans and evidence that things don't have to be correct to be fun. 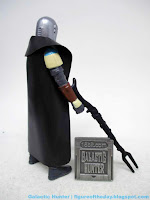 Hasbro's new (old) take on The Mandalorian is good - arguably too good. I was expecting it to follow the line's original feel, by taking a post-Return of the Jedi character and modeling it after the figures of 1983-1985. They got close. This figure has more paint colors than anything in that era, plus has a vinyl cape - which Hasbro phased out of new releases by 1982. I genuinely expected this one to have a cloth cape like Lando Calrissian (General Pilot) or no cape at all like 1979 Boba Fett. The weird thing about this figure is that at $9.99, it's the cheapest mass-market/big box release from Hasbro for this character, and for better or worse seemingly being crafted with a bigger budget than the original. I'm almost opposed to this - it's nearly too good. In my hands it looks like a catalog prototype more than a production figure, simply because of things like the colorful knee pad and the painted silver helmet. The one design decision that kind of rubs me the wrong way is the vinyl cape, since I hated those as a kid and I don't think any post-Battle of Endor character would have had one if we were trying to mimic the old Kenner style. 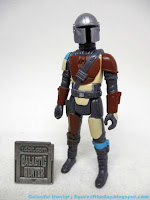 In terms of deco, Hasbro's designer did a good job. The colors are bright, with a bright blue knee pad and stripes on the shoulders drawing the eye. The helmet is brighter than most other Hasbro Mando figures, with a nice light tan on some other elements. The figure surprisingly detailed - he's got quilted sleeves, with the pattern appearing around the back of the elbows. Boba Fett has a similar pattern on his shoulders. Other fans (like the amazing HasNoTalent) have had their take on this style as well, and I like Hasbro's a tiny bit more. Which is good, since this is the one I was able to actually get. 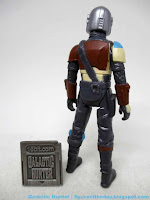 The vinyl cape slides off if you swing the figure's arms back and shrug it off, and when you do you'll see Hasbro painted his backside. I wonder if they were considering a cloth cape - or no cape - during development? With the long neck, I assume it was meant for an added accessory. Once removed you'll see the dark brown armor and some light tan elements painted on the back. Generally speaking, original Kenner figures tended to not get a lot of paint once covered by a vinyl cape or a robe - but there were some exceptions. 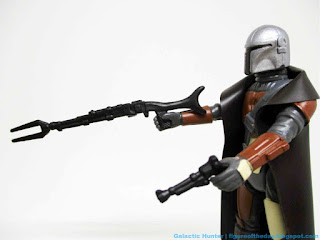 Mando's weapons are new. At first glance the Amban Phase Pulse Sniper Rifle looks like IG-88's blaster from the 1980s, and very much shares its proportions with a tuning fork in it. It's weird in the way you want your Kenner weapons - they frequently added bits or changed things for no obvious reason, like Leia's Boushh staff had a grip on it, or the Stormtrooper blaster had the ammo cartridge on the wrong side. It clearly captures the flavor of the old weapons while giving you a blaster that looks like what he carries on the show. Similarly he has a small pistol that looks close enough to the show gun, but black. Both seem like they were designed by someone who gets it.

The highest compliment I can give this figure is he looks like someone Tig Fromm might hire. You could throw this guy in your Mini-Rigs or have him hunt down Thall Joben, and he fits right in with that late-Kenner world (other than the vinyl cape.) It is my sincere hope you bought a case of these, because getting Mando, Cara Dune, and The Child will likely be a retail bloodbath. This is a format I hope Hasbro embraces because most faults are forgiven - you can even name a figure incorrectly, give him the wrong blaster, and make the size wildly wrong and people will say "heh, that's Kenner for you!" I still think it's too good, with too much paint, but for all we know the hypothetical Kenner of 1987 might have given more paint apps to these guys. (Maybe. But the faces of Floyd Malloy and Lava Clan Fire Warrior Karn might argue the opposite.) It would be a dream if Hasbro pumps out more of these and markets them to kids too - I think everybody would be a winner here.