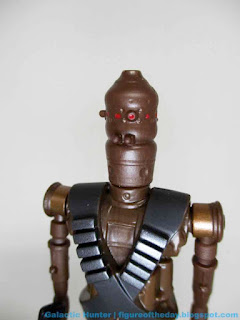 Bio: IG-11, also known as Eyegee-Eleven or simply as IG or Eyegee, was a masculine-programmed IG-series assassin droid who was a bounty hunter during the New Republic Era. IG-11 was programmed to follow protocols of the Bounty Hunters' Guild, and had a built-in self-destruct mechanism to prevent himself from being captured while working as a hired gun. (Stolen from Wookieepedia. Packaging has no bio.) 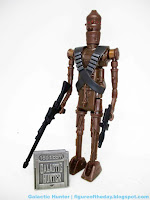 Commentary: Star Wars figures generally get better as they go, but IG-11 (and IG-88 before him) have struggled to get better. Kenner's original IG-88 is pretty spectacular, and served as the basis for the 1996 Shadows of the Empire IG-88 as well as this 2021 IG-11. IG-11 isn't as good as the vintage IG-88, despite effectively being a retooled version of that toy. Also note the final figure has two blasters - the original renders show but one.

Hasbro's sculptors seem to be working from digital scans of the original Kenner figure, but with some flaws. The arms are quite similar to the Kenner original, but the old silver droid had fake joints sculpted on the clawed hands. The new IG-11 lacks those marks, adding in thicker and more substantial (but inaccurate to the show) hands. He can hold the weapons fairly well, but the Kenner original does a better job holding the original Kenner blasters. It would be nice if the hands all fit the weapons like a glove - there's no reason to not give them a perfect fit. 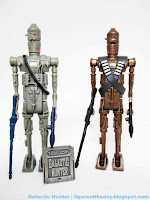 IG-11's legs are largely similar to the IG-88 limbs, but the proportions and some small details are changed a bit. IG-11's limbs do not swing as cleanly as my old IG-88 figures (I have extras, you have to remember these things were worthless in the post-ROTJ, pre-Zahn era) but at least they move. The legs are a little wobbly. He's also pretty much the exact height as IG-88, meaning IG-11 won't fit in your vehicles. The torso is retooled, but is in a similar language to IG-88's. The newer droid's bandoliers are sculpted to the torso with significantly cleaner paint, and two colors to bring it to life. This is arguably far better than anything Kenner would have done - the same is true with the metallic shoulder joints. Kenner would never do that. Hasbro also dropped a few painted dots on IG-11's head, which IG-88 does have. Other than that, it's basically the same head in new colors.

I like this figure - but don't love it. It's a quickie retool, and Kenner was generally not keen on those outside of R2-D2 and C-3PO. Precious few parts are reused, but at least they made the deco interesting. The "lava reflection" color choice is gorgeous, and it's consistent with the "Credit Collection" IG-11 in The Black Series. It's a good figure design, but the execution needs some work. It's also noticing that the blasters are remarkably similar to IG-88's, but they're changed enough so a fan with a good eye will see different cuts and unique choices. It won't hold up as a good copy against a Kenner original. That's this line in a nutshell - it's arguably too good and not good enough at the same time, but packaged collectors will undoubtedly get a kick out of it. Minus the big sticker, anyway. Get it if you can.