Star Wars Figure of the Day: Day 2,819: The Child (The Retro Collection) 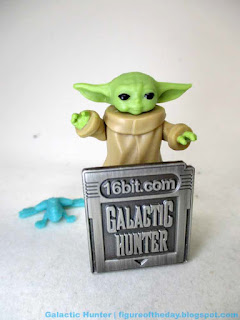 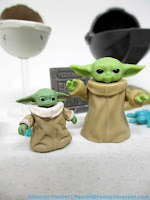 Commentary: The smallest retro-style figure to date is The Child, complete with hovering pram. Back in the day with Kenner, you'd see somebody like Salacious Crumb and Kenner said "this is too small to sell on a package by himself." (Kenner did have leftover bagged ones, but I digress.) To make up some bulk, Hasbro included a fairly sizable accessory. There are probably enough parts in the pack to get your money's worth here, but that doesn't matter. You want the kid, you're buying the kid. 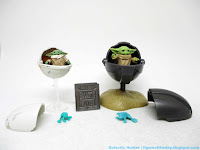 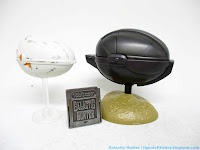 Hasbro's sculptors did a nice job with The Child - but it's really not any fancier than The Vintage Collection release with 3 points of articulation. You can swivel the shoulders and neck - that's it. The head is largely unpainted except for black eyes, and the hands are too small to hold anything. His feet are sculpted, but unpainted - which is the way Kenner probably would have handled it. He has but one foot peg hole, which doesn't seem like how Kenner would have handled that. He's cute and small, fitting in well with the figures I've had for decades. 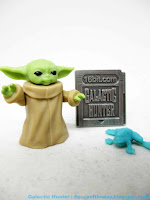 The hovering carriage is arguably too nice. I'm a big fan of Kenner vehicles, and one thing you didn't see in Star Wars was a painted interior. This one has shiny black upholstery, which seems completely overdone given that this would likely have been unpainted as an actual vintage-era toy. The snap-on lid is nice, and the whole thing is based on the Season 1 Finale rebuild of this transport. It looks fine - a little simpler than Hasbro's other offerings, but nothing about it particularly says "retro." Of note, the peg to the dirt stand looks sort of like a LEGO Technic piece. It's spacious and there's plenty of room for the kid and his frog.

It's $3 cheaper than the Vintage Collection release and arguably exactly as good. I'd say you'll buy whatever you find, and these retro guys are arguably more satisfying than anything else Hasbro has done lately. This isn't to say they're doing a bad job - but how can anyone compete with new toys from the line I grew up with? Get it if you dig it, it's fun and arguably $10 worth of entertainment.

Email ThisBlogThis!Share to TwitterShare to FacebookShare to Pinterest
Labels: The Child, The Mandalorian (Streaming Series), The Retro Collection, Vintage (Kenner-style)