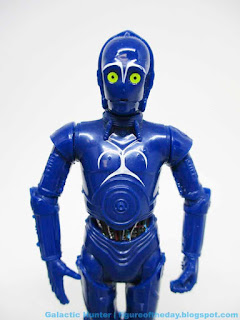 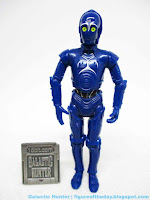 Commentary: It's blue! The Blue Protocol Droid is a decent - and most importantly, different - release. The pin striping only appears on the blue droids, and I think these are unique to the figure - I don't believe this design appears in any story. (I could be wrong.) You can assemble these figures in parts bins - and mix and match. This combo platter goes together nicely and gives you teh blue C-3PO Kenner always wanted to do, but got turned down.   As a reader pointed out, it's also a dead ringer for The Clone Wars' own D-0T!

There were plans for blue and red ones - or prototypes, at least - from the old Kenner line. It's a great concept but they seemed to not want to milk it back then - oh, how times changed. Disney is all about droid repaints and they made for great souvenirs. The stripes on the head look like eyebrows, adding a lot of personality to the same static face we've seen for nearly 44 years. The matching marks on the chest may even make you forget this is the same mold you've bought a few times already. 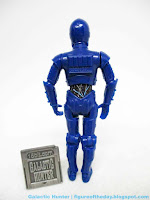 Articulation is build-a-droid standard, with 6 removable limbs and a grand total of 20 points of articulation and a design modeled from/copied from Hasbro's The Legacy Collection protocol droid. I copied that sentence from the last protocol droid review, because, hey, it's still true. With theme parks supposedly being more open, I don't know if these parts will still be available - or if this activity is acceptable given, well, everything - but you can keep an eye out for them. They rarely showed up on eBay as people didn't seem to be assembling them for the flipper's market, so there aren't many to buy. It's a cool figure for the obsessive completist though, and I hope you can find one if you want one. Hasbro doesn't make anything quite like this in their main line, so your only hope is a tourist or passholder got one and got sick of it at this point. Or maybe you can take a vacation in the future at some point.

Collector's Notes: I got mine from Disney Hollywood Studios. Thanks Shannon!  Also thanks Eddie for pointing out that we forgot a cartoon robot!

Hi Adam,long-time fan of FOTD, and I hate to "well,actually", but this protocol droid is D-0T. He appeared in a couple of episodes of The Clone Wars, and, alongside his astro droid counterpart R5-S9 (who was included in the Disney Droid Factory TCW 4-pack), was blasted to death by IG droids in the episode "Hostage Crisis". RIP, D-0T.