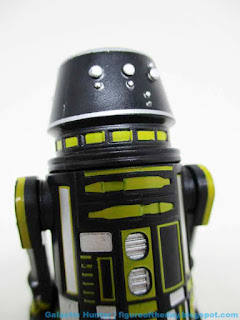 Bio: All different types of Astromech droids populate the Star Wars galaxy. Each droid is different and has their own unique personality and colors. Living on the small planet of Mustafar in the Outer Rim Territories, this little Astromech helps with the local mining operations. Join R5-M4 on his adventure throughout the galaxy. the Force be with you... and your Droids! (Taken from the figure's packaging.) 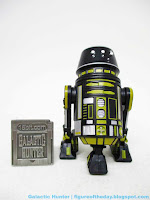 Commentary: When I was still living in Los Angeles, "May the Fourth be with you" was a dumb joke fans told each other - after a couple of years, Lucasfilm tried making it a thing, and Disney really tried making it a thing. This year we're going to get a new TV show for it with The Bad Batch, but on most years we got a sale on stale product sitting around from last year's movie, and maybe a freebie. Action figure fans have had precious little to "celebrate" this clearly most sacred of marketing days, which makes R5-M4 interesting - it's a physical manifestation of a sales pitch, as a toy.

It's the basic Disney BB droid design, again, which was already sold in black and orange with an R5 dome in the bins in 2015 [FOTD #2,181]. So how is this one special? More paint. The black plastic is still blast plastic. The reddish orange is a lot more faded, which I don't like as much, but there's more of it - and lots more silver. The dome is fairly similar to the bin release, minus the faded color, but there are a lot of other changes. The third leg adds orange accents. The silver accents on the feet are different - as are the orange bits on the legs. THere's a lot more silver on each leg, and I count at least a dozen added silver panels on the body. This is the deluxe version, more or less. 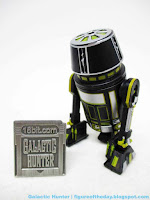 The packaging copy places this robot at Mustafar, which means he's clearly Imperial. I mean, black, silver, red. It's lava, but cooled off a bit. The number of outlines and paint applications show someone at Disney really made the most out of their paint budget, with silver outlines on orange panels and tons of filled-in boxes on the backside of the figure that carded collectors will never see. There's a good, even coat of silver on top of the dome too - there were no corners cut to bring you this robot.

If you bought one Disney droid (after the redesign) you know that they're all basically the same mold with new paint. The legs and dome are removable, there are wheels under the feet, and there are over 100 of them. It's a lot of droids - nobody should have this many toy robots. But I do, and I'll probably buy some more. This one got a little expensive since its debut, but that's what happens when people get bored during a pandemic and start filling the holes in their collections. Since fans have a lot of options for black R5 units there's no real reason to get this one over any other, because they're all good for different reasons. The little variations make for a lot of variety on an obsessive droid completist's shelf, so I don't regret getting this one. I expect I will pick it up in a year and forget which ones were the bin robots and which one was R5-M4, but I blame age. And having several thousand action figures. I'm allowed to do that.

Collector's Notes: I got this from ShopDisney.com.