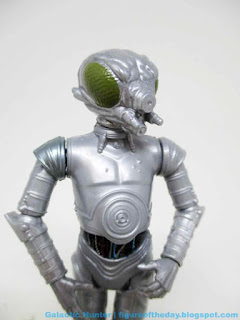 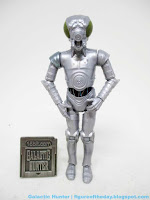 Commentary: Nifty! The Silver LOM-series Protocol Droid is a Disney Parks exclusive, made up of any parts you want. Mine has CZ arms, 3PO torso, 3PO legs, and of course the head. It's a pretty neat design, and a silver 4-LOM certainly feels like a "wrong" color Kenner could have done in the old days. Since no LOM torso was manufactured that I know of, you can just use whatever you want.

What I like about this figure is it's convincingly "off-camera." Like Kenner's old Mini-Rigs, you could imagine this guy hanging out in a line behind R2-D2 and C-3PO on the old Droids cartoon, or appearing in the background of Russ Manning's old strips, or being a broken pile of parts in Maz Kanata's castle. Even with wildly mismatched limbs, it would be a convincing fixture in a Hutt's lair. It's a nifty and completely believable design.

Articulation is the same as the rest, with about 20 meaningful points of articulation - and sadly, no blasters. The silver plastic is nice and shiny, but not vac-metalized. It's still rather reflective, so it may fit in well in any bar or Imperial installation too. The joints mostly move nicely, but as with the others the legs aren't anything special. The right shoulder of these arms have an added silver accent, and of course there are some painted wires on the torso. Theres not a lot of paint here, but what's here is deployed where it counts.

If you have the means to get one at or near cost, I'd say it's worth it. It is in no way disappointing, but it's also completely not essential. It's the perfect souvenir figure, but it would be a build you would likely take delight in having found in a store too.

Great review as always, but I have to point out one thing. Disney did make a silver LOM torso. They made both silver & black torsos to match the LOM heads. Oddly, they didn't make a matching torso for the blue color LOM head.