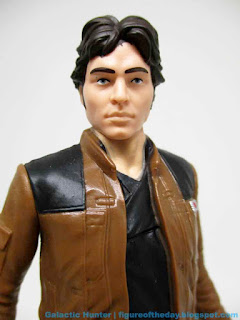 Availability: Unknown - I first saw a production sample in a board room in September of 2018, the first sightings seemed to be around December 2020, I found it in April 2021 Appearances: Solo: A Star Wars Story Bio: Han Solo reinvents himself after leaving behind his old life, growing comfortable traveling with law-benders and scoundrels. (Taken from the figure's packaging.) 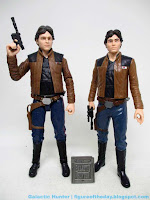 Commentary: This figure was a White Whale for me for over two years. This Han Solo from Solo: A Star Wars Story has a manufacture date stamp of 81061, meaning he was likely stamped out in April of 2018 - I found it at a Five Below in April of 2021. To my knowledge this particular Han figure didn't ship to food or drug stores in the USA, but other waves did - a lot of The Last Jedi stuff shipped to grocery stores near me for years. I mentioned in Q&A that I was still vexed by not seeing this figure anywhere, and then someone said "Oh our Five Below got some" - so I ran out to mine, and found one. I'm slipping in my old age, or because COVID keeps me from doing the full-on big toy runs with obsessive repetition like I used to do. I got this 6-inch figure with 4 points of articulation for a mere five bucks. The Black Series figure looks similar, with more articulation, a removable blaster, great face paint... really you've got no reason to get the simple 6-inch one unless you're in to this sort of thing. And I am. 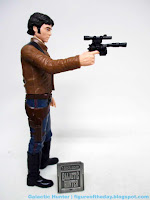 I am not great with faces sometimes - but I don't think this figure was sculpted with Alden Ehrenreich in mind. It could just be the lack of deco and odd positioning of the eyes and eyebrows, because it looks a little bit like Han Solo - but not necessarily like the actor. In many respects it looks like an alternate realistic take on a 1980s Kenner sculpt, plausibly a real person but not the person we had in mind. Given the lead time for product, it's also possible (and speculated) that Disney's consumer product division may have nudged the merchandise designs to look a little bit less like the actor - just in case he was recast. Is it true? They'll never admit it, so it doesn't matter. But it's a face that doesn't scream "I'm Hobie Doyle" - but it's close enough that kids would probably be OK with it if they ever saw it. And I doubt American kids did until somewhat recently. 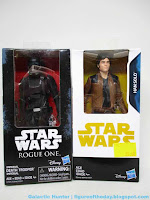 The figure's pose has a great swagger to it, from the blaster arm with his fingers wrapped around the grip, to his other hand looking like oh-so-many old Han Solo publicity stills with the fingers looking like they're almost thinking. The costume is nearly perfect, matching The Black Series figure in almost every way. The bloodstripes are on the pants, the silver pin has the red dot, the only thing missing are the silver rivets on his holster. In many respects, this figure is a great example of how good of a figure Hasbro can make for five bucks, while the $20-$23 collector figures may be overly complicated for what a fan may need. (Obviously, fans will always ask for more articulation - there's no satisfying that demand.) 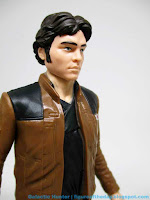 Not finding this figure in stores always bugged me - and now I have to find Chewbacca - so I'm glad to have crossed one more white whale off my hunting list. He stands well, and he looks fine. I'm sure the head could be a tiny bit better, but I've also got The Black Series figure and this whole 6-inch line is more of a fun, cheap curiosity than a definitive collection of plastic. Heck, Hasbro and Disney seemingly completely skipped The Rise of Skywalker for the format, meaning they are smart because I just can't seem to bring myself to say much nice about that film. If you see this one for five bones, I'd suggest buying it - unless you've got The Black Series figure already. Toys like this are fascinating in that you can see what you can make on a diminished budget, but the dubious decision to focus the entire line squarely at adult collectors - and their increasing wallets as the Star Wars generation gets older - means that super-affordable kid-fodder like this turned out to be uncharacteristically scarce. Such is life.

Collector's Notes: I got mine from Five Below, thank you Jim for the tip!