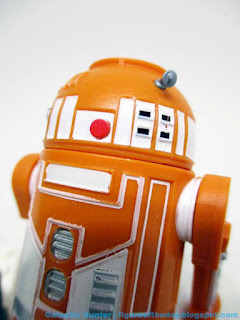 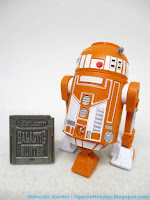 Commentary: The orange R8-Series Astromech Droid is one of many residents of the Toys R Us shelving unit I bought when the store was closing - I wanted to make sure there were always new toys on the shelves of TRU, and... it was a good idea. Some stuff just sat on there, so I'm going through those now. This particular fellow is a brightly-colored dome based on a concept that showed up in some guide books and novels, largely existing outside the confines of most visual storytelling. As such, you probably don't even know you're missing R8 domes and you probably also do not care in the slightest.

The body uses the "R7" Astromech body mold, and it looks great. The orange plastic canister has white panels and some silver markings, making it look like some tacky mid-century robot. It's kind of great - if you squint, you might see a soda can. The default builds all seem to have orange central legs and white outer legs. Does this matter? I don't know - I might swap it out with a white foot. (I got extras.) The paint isn't the cleanest, but it isn't bad. You can see some great white outlines on the panels which really do a nice job of highlighting all the work that went into the sculpt. (The sculpt started life as a Hasbro product in 2008.) There's not much to it, beyond the articulated arm holes and a port for the central leg. They all come off, as does the dome. 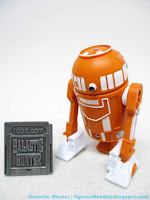 The dome lacks a big eye - or eye cluster - that we got on so many other droids. It's kind of creepy. There's a little stalk coming out the side, and there's a red light circle you can pretend is a mouth or nose on the inverted orange salad bowl that is his head. A raised ring is painted white, with white slices painted inside. A hole sits there so he can wear a hat, which is a thing Disney apparently thinks fans want with their souvenir robots. Maybe they do! It's goofy, but given how many dozens of robots we all have, goofy is sometimes good.

With the white picket fence panel deco on the orange dome, it would not be an exaggeration to say it's a distinctive droid dome and one worth adding to your stash. Normally you don't describe the visual language of a Star Wars toy as "cheerful" or "whimsical," but the bright colors really do make this look a lot friendlier than some of the other robots. If you have the means to get one for a not-crazy price, I'd suggest picking one up.