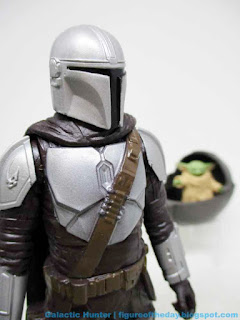 Bio: The Mandalorian is a formidable bounty hunter in an increasingly dangerous galaxy. (Taken from the figure's packaging.) 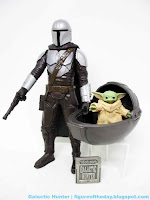 Commentary: Some fans hate the cheap figures - I can understand it, but I am impressed with The Mandalorian as a thing. In 2021, you can't buy a lot of cheap toys anymore - and it's rare you ever see this character on the shelf in any plastic format. To put one out for pennies under five dollars is somewhat mind-blowing - it's 6-inches tall-ish, just barely shorter than The Black Series figure and 75% cheaper. And like 90% less articulated, with a simpler paint job. You get what you pay for, and it's pretty good. In the current toy industry it's a shame these are hidden on checklanes or in grocery stores - kids would probably gobble these up if they saw them.

If this figure were the only one of the character, you'd buy it. You'd complain, but it's not a bad one - there are some things it does surprisingly well. The cape is a separate piece, but not easily removed. The blaster is molded in the hand, but you can't remove it - and there's no Amban Phase Pulse blaster either. It's just a figure with no real removable accessories, and articulated shoulders. The neck and waist also swivel, with a somewhat hollow figure standing easily without futzing with it. It's a good desk toy. 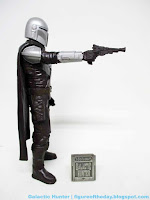 Mando's sculpting is good, with all the armor elements you would expect. If someone painted this figure up like a pro, I bet it would look amazing - it would be great custom fodder, too. I love the silver on the Beskar parts looks brighter than the standard releases, gleaming almost as brightly as the Carbonized figure. It also appears that the brown plastic body has brown painted bandoliers and belts, which is something of a waste of resources - painting the other armor pads would have certainly made for a better looking figure. If it's brown, the specific shade of brown is immaterial. He looks like the figure from the show, but has different knee armor - this sets him apart from The Black Series figures. His suit changes a bit from episode to episode (albeit not every episode), so this figure is different enough and cheap enough to be interesting. If they tossed in a Beskar Spear I'd be all set to give it extremely high marks. 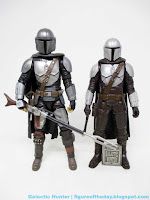 If you have The Black Series figure, you don't need this one. It's neat, I like it, and it's different (and scaled to those figures) - but it's hardly essential. If you can't find it, or need a gift for a fan or a kid, it's a wonderful and cheap figure. I've been collecting action figures for decades, and seeing things at or under $5 was unusual by the year 2000 - seeing something below it today genuinely surprising, particularly given that some of these have good sculpts and nice paint jobs. Less so the human faces. Those need work - applying the fancy face paint would do wonders on these and the 12-inch figures.

It is unlikely most fans will be converted to this format. It's a Disney-era addition, cheap, with some rarities that you may never have a chance to buy. I'd nudge anyone reading this to consider taking a good look at the current wave, because figures like the fully-painted C-3PO [FOTD #2,418] show that a good sculpt and good paint can get you a pretty great figure. Hasbro could make a fortune doing Imperial Stormtroopers for $5 in this format so 6-inch fans could build armies and dioramas. Unfortunately this line tends to get a couple of new releases per year, so I assume this is going to be it for quite some time.

Collector's Notes: I got mine from Walmart, near the registers. I suggest going at night to look at the checklanes when they're not populated by angry customers and their kids.