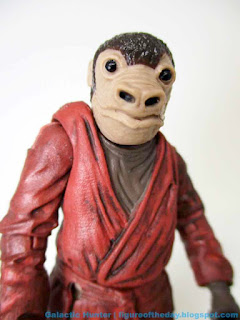 Bio: Zutton was a Snivvian male was an artist who spent time in Chalmun's Spaceport Cantina on the planet Tatooine. (Stolen from Wookieepedia. Packaging has no bio.) 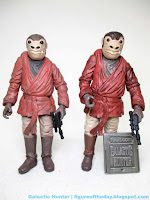 Commentary: Originally part of a Target-exclusive 3-pack under the name "Snaggletooth" from 2012, this Zutton figure is the first wide-release of this mold. In recent years we've been seeing a lot of nomenclature issues, from administrative errors (Kir Kanos/Carnor Jax) to questions of if any of the original resources were right. A lot of the Cantina aliens didn't have "real" names in the 1970s, leading to apocryphal preproduction names, Kenner names, card games, RPG supplements, fan club magazines, and other resources all fighting for some level of definitive-ness.

A very similar alien was made as a figure in the late 1990s was named Takeel. I couldn't even tell you what is right or wrong these days given the fact that we don't know if there is a definitive document somewhere inside Lucasfilm, or if people are just screwing up, or if nobody knows and they're just making up and changing things as we go. There was a Holiday Special Snivvian during Power of the Jedi named Zutton - but now some sources say that's Zutmore, and the figure was wrong. But all I know is that it's 2021 and there's still no Geezum figure, so life has no meaning. 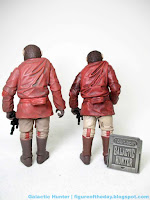 If you got the 2012 Snaggletooth [FOTD #1,966] you probably don't think you need this update. And I would agree with you - while the two have numerous minor differences, it looks like the 2021 figure was an attempt to recreate the 2012 release - the changes are so minor, it would be easy to dismiss the new release as a variation in the batches of plastic or paint. Since I can see numerous differences in addition to the awkward tampo of the new figure's SKU on the back thigh, I have to treat this as a unique release. It's the law.

The new figure's hair is darker and glossier. The black paint on the eyes doesn't completely fill the eyeball - comparing it to reference photos, this makes the new one a smidgen more accurate. The red tunic is a bit more saturated and darker, with the sleeves appearing darker than the torso fo rthe 2021 figure. There's more dark paint wash on the tunic as well, and it's darker this time. The boots are a little more saturated, the pants are a bit less saturated.

The blaster fits in the holster or in his hand, and the sculpt remains good. It's standard super-articulated fare, and one of depressingly few Cantina aliens within the past decade - and as mentioned above, he's arguably not a new character given the similarity to Takeel [FOTD #337] from late 1998. I wish he came with a tumbler of some sort, but a blaster isn't inconsistent with the other figures from Mos Eisley.

Packed at just one per case, I don't expect to see him around much - Cantina aliens tend to sell well, even the reissues sell quickly these days. Hasbro did a marvelous job with the sculpt and I'm glad they cranked out more for new fans who weren't around for the original release. I would also be happier with some actual new Cantina aliens - unless I'm forgetting someone, the last all-new release was Mosep Bineed from 2015. I would strongly recommend this Zutton to anyone that missed the previous releases - but if you're happy with your red tunic Snivvian collection, you can probably skip this one.

Like many cantina aliens, two near-identical costumes were made for the snaggletooth. The two Snivvians in ANH are Takeel and Zutton. Takeel's hump is bigger, his ascot is worn outside the shirt, and his hair is patchier. Ackmena calls the Holiday Special one "Zutmore," so I'm not sure where the name "Zutton" entered the mix.

There's also a running change that finally corrects the color of the knee and ankle joints on the 2021 figure that's just now starting to arrive.