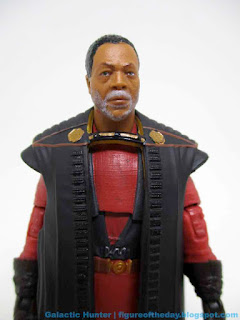 Bio: Greef Karga was a human male and former disgraced magistrate before becoming an agent of the Bounty Hunters' Guild following the collapse of the Galactic Empire. (Stolen from Wookieepedia. Packaging has no bio.) 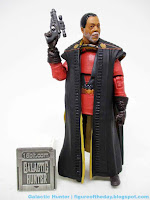 Commentary: The debut 3 3/4-inch Greef Karga is in his season two gear - while the 6-inch is season one gear. It's been a pretty haphazard mix of costumes in these lines so it's not really possible for a collector to build out a whole, accurate scene easily. If this were the early 2000s, I'd say "Oh this is brilliant, they can just re-sell us these characters in new costumes again." In 2021 it's less and less likely that Hasbro will revisit most faces, and it feels most of our figures could be the only character we ever get in that scale. Unless filming on new Star Wars stops and Hasbro (and other licensors) are forced to dig through recent assets instead. I'd much rather have stuff I know than stuff I don't, but I digress. At least with The Book of Boba Fett you can be pretty sure some of your cast will be able to hold to a mask mandate.

This is a pretty good figure with lots of great details, but could've spent a tiny more time in the oven. The face printing doesn't do justice to Carl Weathers' white beard, but you do get a patchy, printed grey one - it's better than nothing. The sculpting seems good, so a deco variant (which will likely never come) would do wonders for improving his facial hair.

I have to assume this figure was made during filming for season two if not before - so if we assume Hasbro worked from concept art, it's astonishingly good. If not, it's still pretty good. The elbows have an excellent range of motion, the ankles tilt, and the wrists both bend and swivel. I had no problems having him stand, although I don't like the mid-torso waist joint - it's ugly, and isn't nearly as pleasing to the eye as one around the belt. Still, his range of motion is excellent for a figure with a thick plastic cape.

The blaster fits in the holster or in his hand, but it's a weird fit. A lot of the blaster just hangs out of the loop on the leg, so I'd recommend having him hold it in his fist so it doesn't get lost.

I hope Hasbro does more Greef Karga figures in this scale, and it wouldn't be a bad thing to see a head variant on this one down the line. If you can find it, I'd say grab it - but remember there's never going to be a season two Cara Dune figure to go with him. He can still putter around on Nevarro, or hang out with a figure of Dave Navarro if they ever make one of those. Which is probably more likely than a Nevarro playset.