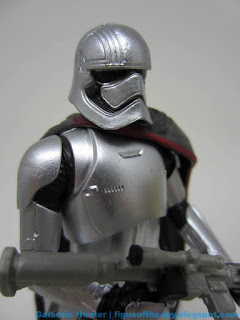 Bio: Phasma later ordered the death of Resistance members Finn and Rose Tico, when they were caught after being betrayed by their slicer DJ while attempting to infiltrate the Supremacy to disable a tracker.  (Stolen from Wookieepedia.  Packaging has no bio.) 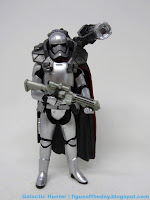 Commentary:  One of the more popular figures from the first few year of the Disney era, Captain Phasma has precious little she can change about her costume.  Maybe we can get a vac-metal version, or perhaps the cracked helmet, but other than that all we really have are things like pose and articulation - and deco.   This de facto Entertainment Earth exclusive changes the pose while keeping the same basic sculpt from the Rogue One version, which is crisper.  What's really surprising is the improved deco, subtly improving an already good figure.

Let's start with deco. Most Phasma figures have silver paint on the helmet and torso, but swirly silver molded arms and legs.  This one paints the whole darned thing, with crisper helmet detailing which stays within the lines.   The cape is pretty much the same, but you'll probably appreciate how the black paint stays where it should and doesn't get at all blobby.  Subtle textures on the  mouth and shoulders remain, and if you didn't get the Rogue One line's 2-pack the improved sculpting bits here are going to be new to you. 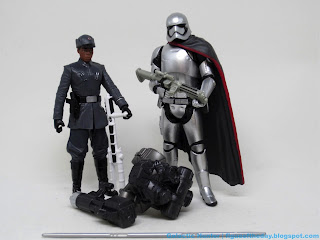 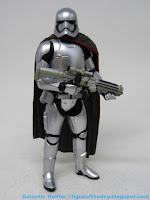 The legs are posed similarly to previous figures, but the arms are new.   I'm kind of surprised how well they work - you can use them to double-grip her rifle, and if you move them a bit she can also grip her pike with two hands.   I assumed she'd need wrist or elbow movements, but it turns out she can just hold everything.   I would not have guessed.  Leg articulation is slightly hindered by the belt, but as she has no ship in which to sit yet I'm not going to throw a fit over it.  It's fine, it's good enough - but seeing how they engineered the arms, we know Hasbro is capable of doing some pretty great things with only five joints. 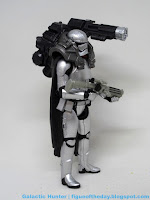 She has no problem holding her rifle or pike.  The rifle can plug in to her thigh like a holster, and she has a bonus Force Link accessory - a backpack.  It makes cool noises, but if they dropped it and cut the price by a buck you'd not have missed it.   It also looks a lot like a rocket launcher, but there's no projectile and it doesn't actually shoot anything.  It's acceptable but surplus to requirements.

As 5-jointed Phasma figures go, this is the unquestioned champ.   The super-articulated one has more movement, but the bonus accessories and paint job here are about as good as we've seen so far.  Maybe Hasbro will come up with something better, but even if they don't it's enough of an improvement that I can recommend it without feeling like a shill.   (The Finn helps a bunch, though.)  Get her if you see this set at a price you like. 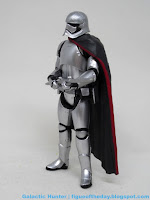 Exclusive Notes: This item was not produced for the North American - and perhaps Global - market.  The item was effectively rescued from oblivion by Entertainment Earth, a story I am not at liberty to discuss at this time but hey, maybe some day.

Force Link Notes: "On my command."   "Report to my division at once."  "Move to your ships now."  (The "Move to" is a little muffled and sounds kind of like a sexy moan.  Or maybe I'm just a pervert.)   "Fire!"   And a bunch of dueling buzzing pike  noises.  I assume that's what they are, anyway.