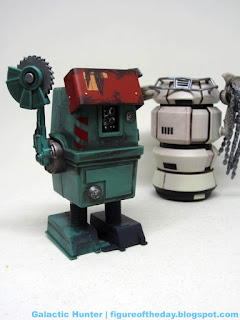 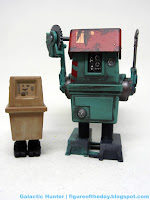 Commentary:  For whatever reason, Disney seems to be controlling droid toy output now - including the wind-up Fight Droid set.  Today we're looking at the blue "gonk" power droid, and online reference for it and its partner is scarce.   I wasn't squinting hard enough at the movie to know if it's even the right size - so this is either twice as big as it should be to fit in with your 3 3/4-inch figures, or maybe the right size.  For the price I just snagged it as Hasbro seems reluctant to put out any sort of background droids in the Disney era.

I like this figure - the wind-up droid is a lost art, and one Kenner (and later Hasbro) never really could get the hang of in the USA.   When you wind a key on its back, the saw and pick arms flail while the figure has that too-familiar wind-up motor drive its legs forward.     What makes it even better, the red "eye shade" moves - so it's like it's waggling its robot eyebrows at you.  This gives the toy a ton of personality, although it seems its mechanism sports one failing thing - the saw appears like it should spin.  My sample is fused solid. 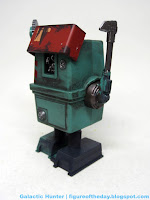 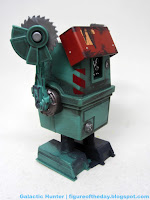 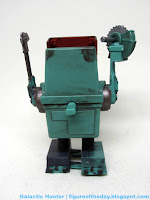 The sculpt and deco are exaggerated a bit for the toy, with giant feet and a big spinny handle on the non-spinning saw.  I love the grime and paint, the rivets, the bolts.  Even if it's too big, I just love owning it - this is the kind of toy I would buy if I wasn't a collector because it's such a wonderful anachronism.   If it's in scale, I'd recommend all of you buy it - but at press time I simply don't even know myself.  I might need to see it a third time to verify.

The flailing, grimy robot is so utterly charming I'd recommend this set just for it.   I kind of regret not buying a second set - it's lovely.   I expect I'll soon learn it's the "wrong" size if I flip through the right guide book, but as a plastic oddity it's great - by far, the most fun figure in the 2-pack.   Kenner was experimenting with various "attack" droids since the 1980s, so this killer Gonk feels completely appropriate to my old fart at play sensibilities.   Considering these guys are about the same size as a Funko Pop! and you get two for ten bucks, even with the shipping I feel like I got my money's worth.   Even without a movie, toys like this are inspired and fun - I really hope Hasbro integrates more fun mechanisms into its future toys, too.  They're far and few between, plus they're exceedingly difficult to get right - this is an oddball miracle I suspect we won't see the likes of which again.

Collector's Notes: I got mine from Disney's web site.  Shipping cost almost as much as the toy.

The saw blade on mine turns freely. Sadly, not linked to the walking motion, but at least it turns.

I got mine from a Disney Store in Atlanta. They're big, but maybe in scale with Black Series releases?

These ARE in scale with the 3.75" scale. They´re even a bit shorter than on set props. That Gonk droid is huge on the movie compared to normal power droids.