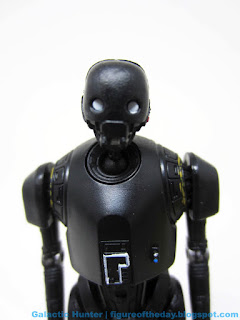 Bio: K-2SO (Kay-Tuesso), abbreviated K-2 (Kay-Tu or Kaytoo) or Kay, was a KX-series security droid originally created for use in the Galactic Empire's armed forces.  (Stolen from Wookieepedia.  Packaging has no bio.) 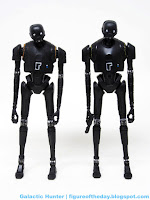 Commentary:  The line for Solo: A Star Wars Story were developed about 18 months before launch, which would mean just prior to the release of Rogue One back when we didn't know K-2SO
died.   It makes sense that they'd want to bring him back again, but the timing is peculiar - why is he two per case for a Han Solo movie that has Han Solo at zero per case?  And why did Hasbro change the sculpt from the 2016 K-2SO [FOTD #2,285]?

Part of the reason to change is the Force Link 2.0 chip - the figure has a slight rattle inside that I assume is the chip, plus a retooled sole of his foot.   However, this 6-jointed figure has a few other surprise changes too.  The back panel's raised elements are recessed and smaller this time.  Details are overall much sharper, with smaller, more subtle vents and greeblies.  K-2SO's Empire symbols are cleaned up and whole, rather than worn off a bit.  His head seems rounder, as opposed to the slightly flatter 2016 release.  He's the very definition of just different enough to make you mad, plus has a new weapon to boot. 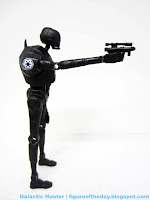 The range of motion is unchanged - he has a wide sitting radius, with wide hips that will prevent him from ever sitting in a vehicle.   Like the arms, his legs are pop-on ball joints you can use to easily dismember him if you want.  The neck is a separate piece from the skull, so you can pose him to look inquisitively at other figures.  This is a nice touch, and something I assume they'd put on a super-articulated figure some day.

I should note his blaster is cool, but you will misplace it.  It's a very loose grip and it's a small weapon - if you aren't extraordinarily careful, it's going to get eaten by your dog or your Roomba.  It's a nice design, but the figure could use tighter gripping fists. 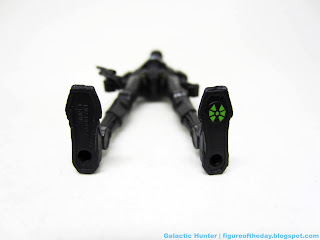 This is not a bad figure - the toy itself is slightly better than the previous one, but not different enough to warrant a purchase unless you're all-in for weapons or Force Link.  If you need a K2 figure, this is my favorite at the size.  If you've got one, for now, you probably don't need this one too - but I should note his is one of the best sound chips since it's actually Alan Tudyk quotes from the movie and not a soundalike.

Force Link 2.0 Notes: "I'm K-2SO.  I'm a reprogrammed Imperial droid."  "Congratulations.  You are being rescued."  "I'm not very optimistic about our odds!"  "There are a lot of explosions for two people blending in."  And blaster sounds.  There may be more, but the interface isn't helping and the app crashes.