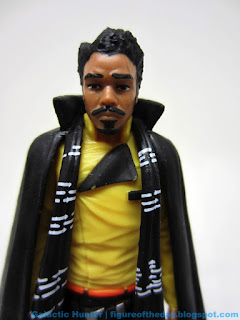 Bio: Lando Calrissian was the owner of the Millennium Falcon before losing it to Han Solo in a game of sabacc. After losing the Falcon, Calrissian put an end to his days as a smuggler and became an entrepreneur, setting up a small mining operation on the planet Lothal before eventually becoming the leader of Cloud City in the skies of the planet Bespin. (Taken from Wookieepedia.) 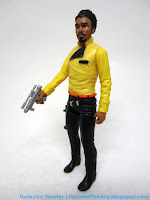 Commentary:  In an era of arguments, controversies, and complaints, one thing everybody seemed to agree on was that we all love Donald Glover and he would make (and indeed has made) a fun Lando Calrissian.  Solo: A Star Wars Story was a relatively weightless but fun romp through a story we all kind of already knew, but despite being a little winky at us, it was fun.   And those of us with taste ran out to buy Lando as soon as we had a chance.   For some reason Hasbro put him in a 2-pack with an army builder, and I'm happy to say it's a pretty good set.

Lando has a great Donald Glover likeness with the limited paint available at the size.  The eyes are clear, the hair is good, and the facial hair is fantastic.   I love the shirt, I love the colors, and I'm surprised we got painted stripes on the scarf.   The boots may not have the exact same gloss and the bigger figure has a little more going for it, but as a 3 3/4-inch figure in this era it's a perfectly decent paint job. 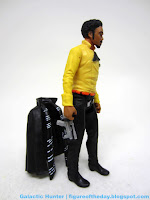 The figure lacks some paint applications we got on the larger figure - Lando's cape isn't lined at the small size, for example.  They didn't paint his ring.  This is the kind of thing that irks me given the prices of these figures, but I assume if you're not going to squint at these figures and scrutinize them, it matters a lot less these days.   Now we're putting most of our attention to the bigger guys, and with a few vocal fans washing their hands of the Force Link format I can't blame anyone for not catering to the collector eye.  Having said that I really enjoy this figure - the blaster lacks the barrel, but it fits in his holster.  The scarf-as-part-of-the-cape was inspired.  Most of the color translates to the final product.

He stands best with his cape on, but finding his center of gravity without it may take some doing.  He can sit well, which is great given he's a pilot.   The vehicle may not be designed especially well for him, but again, that's life - or rather, that's where the toy economy is in 2018.   If you haven't bought this set, I would steer you to eyeball it and give it some consideration.  I assume a super-articulated Lando is inevitable, but when? That I don't know.  Until then this Lando will most likely hang out on my desk, because he's awesome.   If you just want a Lando, go get the 6-inch one.  But if you want the classic scale, don't let the lack of articulation scare you off. 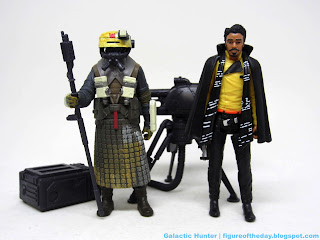