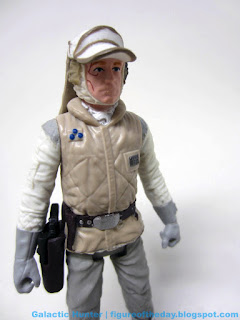 Bio: Wampas are powerful, furred bipeds that dwell in the snowy wastes of the ice world Hoth.  These hulking predators have razor-sharp fangs and claws, yet move with surprising stealth, relying on their white fur for camouflage while hunting prey such as tauntauns. 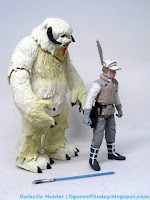 Commentary:  If it seemed like we got a Luke Skywalker (Hoth) recently, we did - we got a few.  In the past few years, we got a The Black Series one in 2014 and a 5-jointed one in 2015.   This one isn't the same as either - Hasbro took the same basic costume, but decorated it differently.  Neither version is necessarily superior, as each offers unique features with added (or missing) paint details.

Recent super-articulated releases feature white hands, painted silver bits on the gloves, more silver details, and goggles.  There aren't any goggles here - but Luke's scarf is articulated, and that's a rare perk.   He looks pretty cool upside-down, plus his parka has a "skirt" now.    The soft plastic has enough give so he can sit, but there aren't any vehicles or tauntauns for him right now - so he'll just stand.     I like that they added the white trim to the boots, and the holster actually works - that's a nice perk. 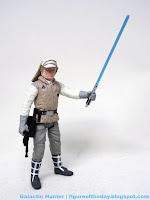 Luke's head is painted pretty well, with clean scars and fleshy face  that certainly looks like Commander Skywalker.   The one thing I felt was missing was the silver on his rank badge - the three blue dots are there, but they left off the silver back.  I don't think a lot of people are going to notice it's missing at that size,

The weapons are a blaster and a lightsaber.  Neither have any problems fitting in Luke's hands, with a decent smaller pistol that easily slips in the holster.  Luke's lightsaber has a loop on the back, but there's no hook on which to hang it.   It's still decent.

I like this figure - I don't need it, and I assume you've probably got about a dozen Hoth Lukes if you've been doing this for a while.  It's basically true to the movie, and it has a great Wampa with it.  I wouldn't  necessarily recommend buying the set just for Luke - but as a complete set, it's great.

Packaging Notes: The box is a comical waste of space - it is mostly empty.  The Wampa is tucked behind a window showing Luke, so about 70% of the packaging is empty, wasted space - this happens a lot. Sometimes it's because an item is thin and log, but in this case it's just a huge waste of space.  A great toy, but the unboxing experience can be an important first impression - and this one has a great toy in a lousy, empty waste of a box.

Force Link Notes: "I'm looking for a great warrior."   "I won't fail  you.  I'm not afraid."  "There's something not right here.  I feel cold... death."  "You'll find I'm full of surprises."  "I can help them.  I feel the Force!"   And a bunch of lightsaber and deflect noises.  None of these are from Hoth - all are Dagbah or Bespin lines.