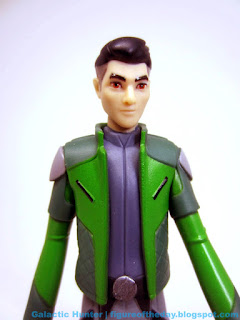 Bio: Confident and skilled when a New Republic X-wing fighter, Kaz now feels out of his element having been assigned to be a spy for the Resistance. (Taken from the figure's packaging.) 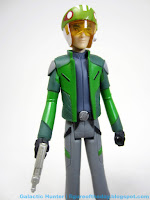 Commentary: On the show, Kaz Xiono oscillates between bumbler and go-getter. Sometimes, he's a pilot with skill.  Sometimes, he's an idiot who will let people trample over him, only looking competent thanks to an even denser sidekick who, despite being a series regular, has no toy.  I don't know who is planning these waves - Kaz is the only series regular in the entire basic single first wave.   It's like a wave made mostly of Constable Zuvio or Paige Tico all over again, but at least this guy is on every week and gets a toy so those who love him on the show can indeed get him.  Unlike, say, Han Solo last year.  But I digress.

This figure hits all the right marks - had Hasbro any vehicles, his articulation seems designed to easily sit with legs at the right angle and arms that don't swivel out too much.  He's skinny and closely matches the colors on the show - the pants aren't quite right, but everything else seems more or less on point.  The face looks like the animation model, the jacket is perfect, and the belt buckle is even right.  Bonus credit to Hasbro for sculpting the jacket as a separate piece, allowing the figure to look a little more three-dimensional and not in any way restricting movement when being posed.  The proportions and style are more cartoon-like than some previous animated lines, with texture as appropriate in a few spots.  Mostly he's smooth, and one might assume the grey sideburns are to indicate he's old.  But he acts like a dumb kid, so... take your pick. 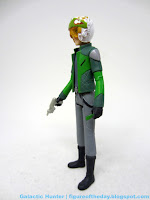 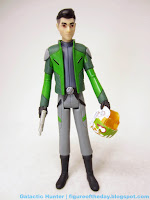 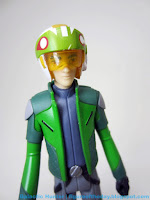 I admit I'm behind on the show and just haven't been feeling it yet.  I'll keep giving it a chance, because I can't not.  He rarely used his helmet or blaster from what I remember, as the show seems to be trying very hard to not have every episode be a shoot-out.  Kaz has no problems wearing his helmet, or holding his blaster.

Hasbro did a great job on what seems to be a tough task - increasing prices, decreasing accessories and features, and a show with ratings about as low as Rebels at its nadir, it's a wonder we've got anything.  I like the character design, the character's performance is good, and the action figure is well done for what it aspires to be - you just have to get excited for the show.  Maybe it gets better?  If you get a chance to pick up a Kaz figure at a good price, you might want to do so.  I can't complain about the toy.  The show, sure.