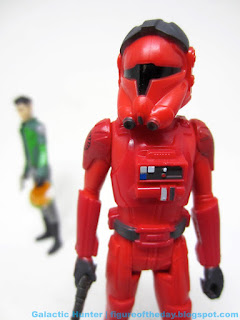 Bio: A vicious, daring man of few words, Major Vonreg is known for his custom crimson TIE fighter and his lightning fast strikes against anyone who dares intrude into First Order territory. (Taken from the figure's packaging.) 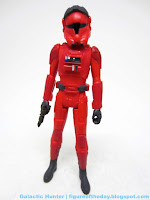 Commentary: I assume Resistance will go down in history like the 1985 Droids cartoon - colorful and neat, but sadly failing to strike a chord with the existing older fans.  I know I've whined about the show... but I love the figures.  The paint jobs on the human faces are just so perfectly precise and the names have that Droids-y Star Wars-y feel.  Major Vonreg sounds like he could have totally been around the Pirates of Tarnoonga or Admiral Screed's crew, but he's under the employ of the First Order.  He's a red TIE Fighter Pilot - basically an absolute gem of a figure for toy dorks or part-time fans that will no doubt infuriate collectors because they either don't care or are angry we still haven't gotten Neeku and probably never will.

This 3 3/4-inch figure does everything right.   It stands, it sits.  It has a narrow profile more like the classic Kenner figures, and as such it has a great center of gravity that allows him to stand unassisted.  The hand perfectly grips the small pistol.  The paint job is superb too - while Hasbro left off the bright red backs of the fingers, they got pretty much everything else right.  They even painted the darker red shoulders, gauntlets, and kneepads when they could have left them the bare plastic color and odds are most fans wouldn't think twice of it. 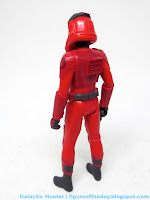 While $10 seems absurdly expensive on a $10 5-jointed figure, I like it. I assume Hasbro knows this - it wouldn't surprise me if Resistance evaporated quickly and was never spoken of in toy aisles again.  With that in mind, go get Vonreg now.  Just do it.The buttons are painted cleanly, and the design feels like another mutation spawned out of the imaginations of the late 1980s "everybody is phoning it in" era of Star Wars. It's new, but not too new.  It's different, but not in a boring samey way.  If Hasbro produced a normal quantity of this figure, that probably means it'll be something you kick yourself for passing up later.  I wish they just bypassed 5-joints and went right to Vintage for the extra three bucks, but I'll take it all the same.  It feels like an old artifact from the future, and it pushes all my old Star Wars cartoon buttons.  Get it.