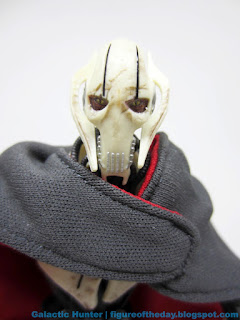 Bio: General Grievous  was a brilliant Separatist military strategist and a feared Jedi hunter, known for his ruthlessness and hacking cough.  His body itself was a weapon, allowing him lightning quick strikes and devastating blows.  But he was also quick to run from a fight, a tactic that worked until one final meeting with Obi-Wan Kenobi. (Taken from the figure's packaging.) 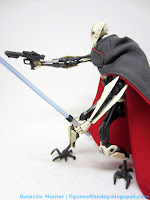 Commentary: As a kid I kind of rolled my eyes when a teacher on TV or real life went on about someone not living up to their potential, but now I'm old enough to totally get it.   I knew General Grievous would have issues due to the character design, but Hasbro managed to work around some but not others.  The Separatist droid figures have thin limbs that generally don't react well to gravity over the long run - even when placed on a figure stand's peg, the limbs tend to sag and bend over time.  This Grievous solved the problem - by not giving him foot peg holes.  Each of the joints is sturdy and ratchets nicely, but the plastic is still pretty thin so I expect this figure will face-plant and dive off of a shelf without some sort of doll stand to hold him in place.  It takes a tiny bit of effort to find the center of gravity to keep him standing, but with this design that's expected. 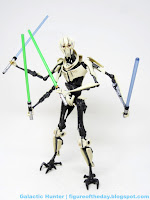 The figure is loaded with articulation - both more than you would expect, and not enough.  Rocker ankles, multiple elbow joints, and double-knees are most certainly welcome, but there's no meaningful bicep swivel thanks to the arm-splitting gimmick.  (Swappable arms may have solved this problem.)   The sculpting is top-tier, and the face paint is wonderful with little hints of mucus and gore under the mask.  The damage and scrapes are painted well,  and his scowl comes through nicely.  I'm impressed how well the figure works when all his arms are split up, but some things are missing - no wrist joints, for example - so the resulting figure is good, but won't "wow" anyone.  Hasbro got swivel wrists in the last super-articulated 3 3/4-inch release, which was a "basic" $10 figure too.   Given this has a 50% upcharge over a "basic" 6-inch figure, I'm not going to say it's great.  It's OK. 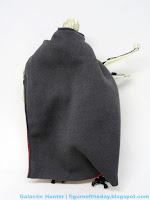 The cape, I don't like the cape.  It drapes oddly around the neck, it hangs strangely, and it lacks the distinctive robot skull on the back that most of the previous figures had.   It just feels weird - but so did the 3 3/4-inch cloth cape last time around.

But it's 1.0.  If Hasbro revisits this figure with a corrected cape, perhaps with a better drape and the symbol, you might want to buy it again.  A stand and retooled arms could also make a neat reissue down the road - I'm sure someone is already contemplating some sort of 2-pack with Obi-Wan Kenobi.   If you're reading this in a future where Grievous did get some sort of revised "Archive" reissue, I'm sure that one has got to be better than this one.  This one is OK - but it's a little blah given that we're 14 years out from Revenge of the Sith and things like that cape symbol should have been caught by Lucasfilm if Hasbro missed it.  Don't they have people dorkier than us in their approvals department?  Hasbro got it more accurate in 2010 with The Vintage Collection - given the premium deco and pricing with The Black Series, I would have hoped for something better.   It's by no means a failure, but given the quality of previous releases and the fact that those older figures were more accurate to the movie's design, hardcore fans will be disappointed but your average schmuck will see this as a perfectly acceptable General Grievous figure that will, over time, probably fall off your desk and will see a lightsaber blade snap. 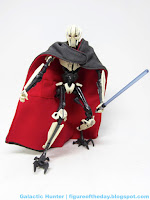 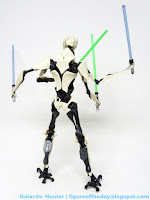 Email ThisBlogThis!Share to TwitterShare to FacebookShare to Pinterest
Labels: General Grievous, Revenge of the Sith, Separatists, The Black Series 6-Inch