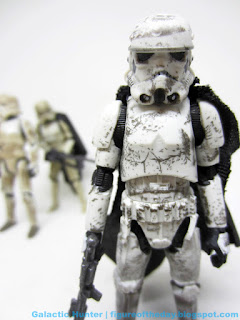 Bio: Stormtroopers were the assault/policing troops of the Galactic Empire. (Stolen from Wookieepedia.  Packaging has no bio.) 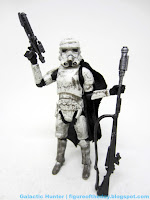 Commentary: The Vintage Collection is a vexing thing.  It's plagued with reruns and characters the target collector market doesn't necessarily want, but when they do a good figure it's perfect.  After Klaatu and Yak Face, we now have the amazingly good Stormtrooper (Mimban), a hard-to-find Walmart exclusive that seems to be an entirely new sculpt.  It has thigh swivels!  It has bend-and-swivel wrists!  It has two weapons and a cape!   The muddy deco is really sharp, with splatters all over and darker mud on the shoes.   While the soles aren't black, I don't think anyone will notice.  Painted details on the helmet - complete with visor - all look superb. 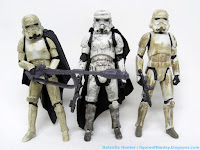 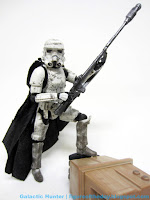 Unlike other 3 3/4-inch Mimban Stormtroopers, this one has all the important landmarks on the helmet painted.  The little flourishes on the sides and back are all filled in, as are the vents on the cheek tube region.   I can't complain about the range of movement - he can stand and sit well, and even some weird, squatty action poses all had him standing without a problem.  The joints are nice and tight, and this figure is one of Hasbro's best Imperial troopers.  I would buy more, but I only saw one, and the lack of Empire-specific large vehicles and playsets has slowly put the brakes on my army building.   With the Barge I'm kind of questioning what the future might look like, but the opportunity to deploy a large Mimban population seems unlikely.

This is the best version of Hasbro's filthiest trooper.  The 6-inch one is nice, but I really like this one a lot more - it's just such a wonderful mess with a great cape.   I have had some difficulty getting both hands around the big rifle, but that's not going to stop me from telling you that this is the absolute best overall version of a Stormtrooper we've ever had at this scale.  A plain white one will be a surefire hit, or rather, it would be if you were able to find it and buy it when the time comes. Hopefully we'll see an Imperial installation requiring these guys in the future - they deserve an excuse to be bought en masse.   Nicely done, Hasbro.

Collector's Notes: I got mine from Walmart after going out for burgers.