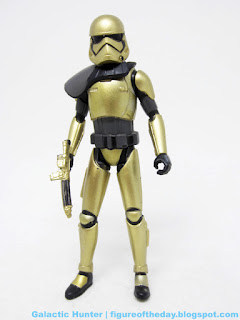 Bio: A fearsome First Order stormtrooper officer, Commander Pyre stands out from the legions of identically equipped soldiers with his black and gold armor. (Taken from the figure's packaging.) 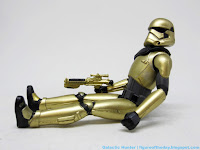 Commentary: I'm slowly catching up on Resistance, and I can't say much about Commander Pyre yet. He's gold! And he gets to do slightly more than Phasma!  I assume he exists because it cuts the animation budget to just recolor and modify a base Stormtrooper, and to that end they did a nice job with the design.  It's not unlike the 1990s Star Wars comic and RPG characters we got - similar, but different.  It's appropriate to the story, adding a familiar pauldron and slathering gold paint everywhere really does the trick.

While the legs can't be posed at a perfect right angle, they can swing forward nicely. The arms swivel, and there's a ball-jointed neck that just works great.  Pyre is like the real classic Vintage figures, with a narrow profile and the ability to fit in many of the old Kenner vehicles.  This is good - because so far, there are no Resistance vehicles despite the designs looking pretty cool.  (Especially the pirate craft!) 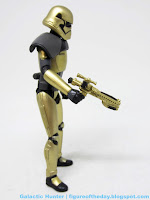 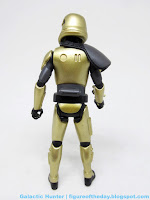 There's not a lot of special painted detail here, mostly because it's black or gold everywhere you look.  The gun can't plug on the figure's leg like the movie First Order troopers, but at least he can hold it with no real problems.   It's kind of weird seeing C-3PO's colors on an evil trooper, but it works!   I like these figures a whole lot more than the TV show from which they originate, so I'd suggest going and getting yours before they disappear.  Hasbro and/or Lucasfilm have short attention spans when it comes to supporting their TV properties, and it wouldn't stun me if what we see now may be the bulk of what we get.  Get while the getting is good!