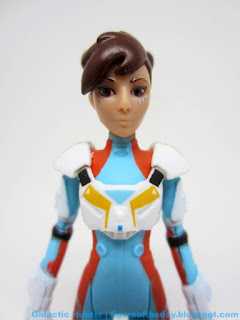 Bio: A daring pilot at the Colossus station with a sense of flair and competitiveness, Torra Doza has the combined energy of a hotshot ace and a fifteen-year old. (Taken from the figure's packaging.) 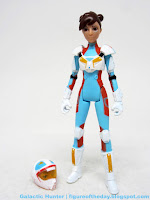 Commentary: This is another good one.   Torra Doza doesn't do much early in the show, and her racing costume is pretty Earthy.  You might recognize the color scheme from either Hot Wheels collecting or their real-world inspirations from Gulf Racing.  It's nice that the Lucasfilm team made racing teams identifiable by using colors racing fans might recognize instantly.

The figure is pretty great.  She has a harness on which covers her chest and shoulders, not hindering articulation.  The helmet is actually an alternate head - you can see a painted face inside the visor.   I had a heck of a time getting it on the neck peg for the photo, and I don't know if it's just mine or not - but the helmet head doesn't stay on well.  It looks great, but it's not a particularly easy swap despite being on the same kind of neck ball peg Hasbro has been using for over 15 years.

For a 5-jointed figure, she's perfect. The legs swing forward and she sits at a normal right angle, so you can be furious that Hasbro has yet to (and let's be realistic, will never) release a companion vehicle.  The limbs are good, the paint job is decent, the coloring is bright, and like other Resistance humans she has a fantastic paint job on her face.   A few details were left undecorated - a couple of greeblies on her neck and above her belly, as well as her chest computer - but it's not like a better version is coming.   It's pretty good, and if it weren't $10 you'd consider this a great figure for the asking price.  For $10, I expect things like a blaster or maybe some more paint - but the second painted head in the helmet is no slouch. 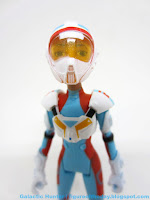 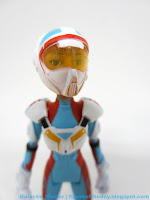 While by no means essential, she's part of a currently 10-figure collection for this TV show.  Disney has proven the be good at releasing new stuff but not great about promoting it and developing (exploiting) it fully at retail, so like the 1980s TV shows it might be a small set of toys.  For that reason alone I'd recommend grabbing these figures now just because you probably won't have too many more series to worry about.