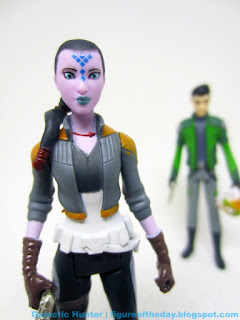 Bio: A salvager who scours the oceans and islands of Castilion for crashed starships, Synara keeps much to herself. (Taken from the figure's packaging.) 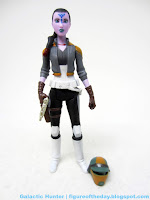 Commentary: Unsurprisingly, I like the Synara San figure too despite her name being too similar to that of fonts.  This is a figure that manages to do a good job translating an excellent design to plastic.  Her belt, kneepads, and boots look a little bit like the Empire's Biker Scouts.  Her helmet looks a smidgen like Lando's from Return of the Jedi.  She's of the same alien race as Luminara Unduli and Barriss Offee, plus she has a swell silver blaster that fits in her holster.  The face paint is also pretty much perfectly where it needs to be, crisp and colorful.

The helmet fits fine, the coat is sculpted close to the body, and she stands just fine.  The Biker Scout belt blocks her ability to sit a bit, but it's still a decent range of movement compared to countless other figures.   Thanks to her piecemeal costume, cool helmet, and alien uniqueness, she could probably fit in with any Cantina or Jabba's Palace diorama you were looking to populate.   There's a ponytail hanging off her head too, giving the design a little more personality. 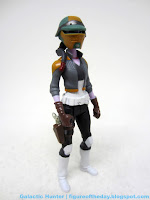 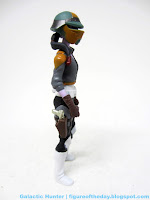 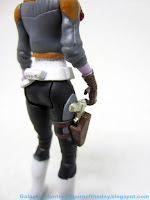 As a semi-regular character, it's wonderful to see her in the plastic. There are some prominent figures we haven't yet seen as toys, and some that are glorified cameos - like Poe - that gobble up some of the wave one slots.  This is a worthwhile figure, and I would love to see more of her friends made as figures too.  Hasbro - well done.