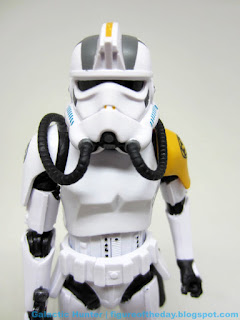 Bio: An elite squadron within the Imperial ranks, jumptroopers (also known as rocket troopers) were outfitted  with jetpacks and utilized in tight spaces.  They were trained to act in unison, often swarming and overwhelming their targets.  (Taken from the figure's packaging.) 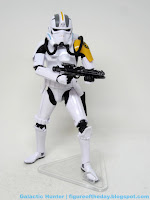 Commentary:  While I did pre-order this figure, I don't own a console on which to play Battlefront II and couldn't even remember that was where this Jumptrooper came from.   As with many Stormtroopers, it uses the base 2013 trooper figure with some new parts.  The helmet, backpack, and shoulder pads are new - everything else seems recycled, even if we saw minor tweaks like the torso with a hole in the back used for Sandtroopers.   You get the double-jointed elbows, bend-and-swivel wrists, rocker ankles, and the usual gaggle of what makes Hasbro trooper figures pretty great.  It's clean - no battle damage here! - and looks like a fusion of the classic design with something modern.  It very much looks like what it is - a video game reinterpretation of a classic design. 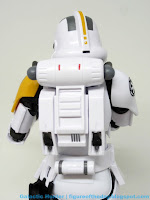 With just shy of 30 points of articulation, this glossy white figure stands quite nicely.  Thankfully, Hasbro decided that wasn't enough to make the figure interesting and threw in an all-new display stand.  It's a triangle with the series logo on it, and the foot more or less fits in there.  it's a little tight.  I don't believe it will help the figure stand on one foot over time - mine lasted minutes - but it'll help keep him from toppling on the shelf for a little bit longer.

I generally like that Hasbro is doing some neat trooper exclusives, and the design here does look cool. I also wouldn't have minded if they kept the old Jumptrooper design from The Force Unleashed games, as that was also a good one.  Hasbro did an admirable job translating the game art to a figure, but I assume for many collectors this is a figure for its own sake.  Maybe gamers are excited about it, but demand for the Inferno Squad Agent doesn't seem to be particularly high, but the Battlefront Shock Trooper seems to be very much desired.  (I  blame it going to Walmart.) 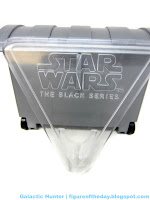 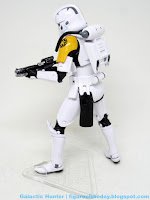 For the asking price, it's not bad - it looks cool and fits in to your shelf of Empire dudes.  I'd rather have more movie figures, but I assume this was done because of GameStop staying on message as the game itself no longer seems to be in any real demand.   New troopers make the line interesting, and I'd be keen to see what Hasbro designers might do if given free reign to do one or two of their own these days.