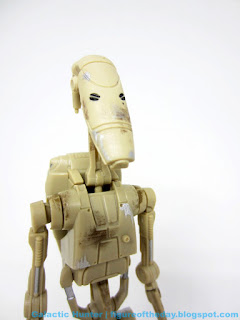 Bio: Rather than use flesh-and-blood warriors, the Separatists prefer mindlessly loyal soldiers that are easily controlled.  Battle droids are dim-witted and no match for clone troopers or Jedi, but they weren't designed to be smart - they were designed to overwhelm Republic civilians through sheer numbers, something they do very effectively.  (Taken from the figure's packaging.) 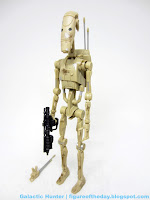 Commentary:  20 years on, you get the feeling Hasbro and Lucasfilm still don't much like the prequels.  It's a pity, there were some awesome designs in those movies and this Battle Droid was a hit as a small figure in 1999.  Today, six years into the 6-inch line, Hasbro adds a third character from The Phantom Menace in the line.  I can't assume we'll ever see the entire main cast at this rate, but at least we're getting Obi-Wan Kenobi this year.   Oh, and this Battle droid is pretty good.

I often roll my eyes at the 6-inch line and vintage line because there's not a lot of room to surprise anyone - the same basic cuts and joints are upgraded with a new joint every few years, or some new paint technique.   Lather, rinse, repeat.  Only though weird droids or unusual body designs do we get anything truly interesting, and given the problems many of these spindly droids had in the smaller scale I was most definitely interested to see what Hasbro would do with these guys. 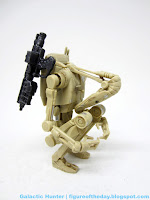 One problem that may come up are limbs warping over time.  Many of the original smaller Battle Droids could be placed on display stands and would gradually tip over with time - I recommend you use stands with waist clips on this kind of figure to avoid such problems.  Hasbro shoved a ton of articulation on this one, with about 24 joints.  That's a lot.  He can stand, but due to the feet and proportions it's difficult to get him to keep standing up without support.  You can get him to fold up and crouch down, and he even has the telescoping antenna in his backpack!  It'll go great for that Battle of Naboo diorama you'll never make because there are no Gungans and you'd never buy enough of them to make it anyway.   You'd probably give it some thought, though - the battle damage and paint scuffing is really cool.  I like what Hasbro did here, and I wouldn't mind seeing a few deco variants of this one eventually. 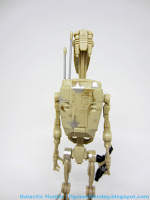 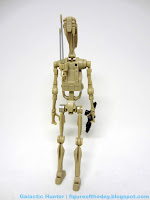 I like this figure, but I think he'll need some long-term support at the waist or under the arms.   The design is great, I love the added range of motion in the neck and wrists, and it's surprisingly expressive for a relatively dumb bit of cannon fodder.  Nice job, Hasbro - and thanks for including parts to let us know you could make OOM-9 if you feel like it.  (We are interested.)   Get yourself the Battle Droid, but I would probably not bother to army build it.  I have to assume we'll get variant deco figures later.