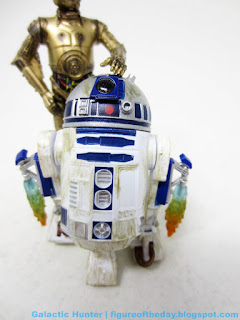 Bio: R2-D2, pronounced Artoo-Detoo and often referred to as R2 (Artoo), was an R2 series astromech droid manufactured by Industrial Automaton with masculine programming. (Stolen from Wookieepedia.  Packaging has no bio.) 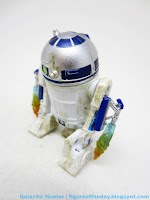 Commentary:  Like his companion, this R2-D2 is fundamentally The Last Jedi 2017 figure with new deco and packaging.  That figure was, itself, a modified build-a-droid mold, so you can pop off the dome, jets, flames, and all three legs.   If you've bought previous versions of this mold, you know what to expect minus the deco.   R2-D2 has wheels, but some of his panels were left silver rather than blue giving him the appearance of early onset droid-pattern baldness. 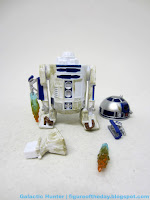 The top of the dome and one of the side panels are left blank, which is a shame given this is a great mold with otherwise superb paint.   The projector has a dot painted in the middle, the big eye is glossy and black, and there's a ton of grit that looks great.   I was really impressed by the flames - Hasbro's clear plastic fades from blue to yellow to orange, and it's gorgeous.  Much like the Kaiju-inspired deco of its Jurassic World: Dino Hybrid toys, Hasbro seems to be taking pointers from Monster Kolor sofubi customizers and turning high-priced collector paint jobs out on kid-focused toys.  The results are striking - I'd like to see more of this kind of coloring on Hasbro toys.

It's good, but certainly not essential.  You've got tons of R2-D2 figures from this basic mold, so you may already have one you like more.  This R2-D2 has tons of great silver painted bits and wonderful grime, but the top of the dome is iffy enough that maybe you'd want to mix and match with other build-a-droid figures to get one to your liking. Hasbro did a good overall job, minus the dome quibbles.  Aside from that, this is one of their best efforts.

Force Link 2.0 Notes: Beeps from the movies. You know the ones.