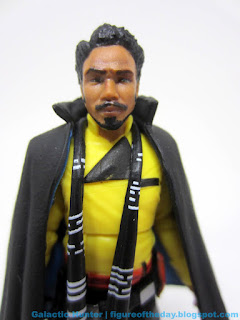 Bio: Lando Calrissian was a human male smuggler, gambler, and card player who became Baron Administrator of Cloud City and, later, a general in the Rebel Alliance.  (Stolen from Wookieepedia.  Packaging has no bio.) 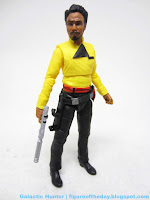 Commentary: I was a little surprised to see Lando Calrissian in this line, especially a full year and two other figures after the movie came and went.  Wearing the same outfit as the other figures - one that has a lot of similarities of what we'll see in The Rise of Skywalker - I would almost complain that it's unnecessary.  However, as usual, Hasbro crams in a lot of improvements and for that reason you'll want to replace your Force Link 2.0 version with this one.

This time around Lando's blaster has the added muzzle attached, and it's not removable like on the 6-inch version.  Lando's scarf and cape are two separate pieces, and the holster is sculpted and molded separately from the body.   He's not going to sit with the blaster in his holster.  Hasbro did a nice job painting the scarf and the liner of the cape, with a little painted detail in the blaster to boot.  Short of an alternate blaster without the muzzle, there's not much else I would do to add to this figure. 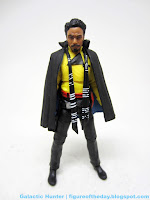 The figure itself is really good.  You get articulated ankles, bend-and-swivel wrists, the double-jointed neck, and yes, the thigh cut are all here.  The weird ab joint is also here sadly, as I assume Hasbro doesn't like articulation being hidden at the belt for some reason.  I don't get it, myself, the belt seems to be the perfect place for a joint.  Donald Glover Lando's head is a gem, with a great sculpt and just a smidgen more paint. He seems to have a bit much on his forehead if you get too close, but at a distance you get a decent amount of detailing.