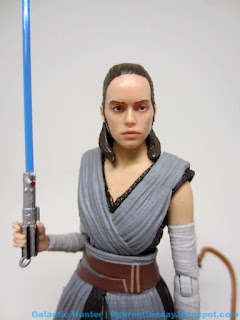 Bio: A scavenger toughened by life in Jakku's harsh deserts, Rey has been drawn into a galaxy-spanning conflict and learned that her life is being shaped by the mysterious power of the Force.  (Taken from the figure's packaging.) 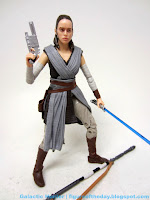 Commentary:  While I am a fan of Rey (the character) I am finding Rey (the toys) to provide diminishing returns.   This figure is a theme park exclusive that almost certainly qualifies as "just different enough to make you mad."  The costume's colors are pretty much identical to the previous releases of the same costume as a 2-pack with Luke Skywalker from SDCC 2017, or the individually boxed figure from September 2019, or Toys R Us' obscenely overpriced $40 Rey with some soft goods and a display stand from Toys R Us from late 2017.  On top of that, there's a wounded arm variant of the single figure - so the collector who loves Rey has already bought this figure in this costume with this almost identical mold up to five times before this release.  And that hardcore fan will no doubt be drawn to Disneyland, and will probably buy it again.

The good - the figure's costume is true to the movie, with a good range of articulation just like before. She has her staff, her lightsaber, and a lightsaber - the latter of which has a rich deep blue blade, which is a nice change of pace.  The figure's main new feature is the portrait getting that "hyper realistic" photo printing, which gets better every year.  They did a nice job making this Rey figure look more like Daisy Ridley, which is pretty good as previous releases found little improvements with color and eyeliner here and there to make the facial features pop.  I can say that this is the best version of this Rey Hasbro has ever done, but two years later and several variations after... it does not feel essential nor does it feel timely. 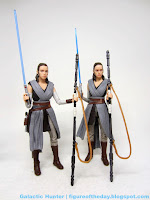 With the basic single figure of Rey showing up at second-hand stores around my town for $3-$5 sealed in the box ($12 or under on eBay) and also the soft goods + display base version going for under $20, this doesn't seem terribly necessary.  Since she ties in to the attractions, it makes sense that the figure exists - but I find myself oddly lamenting the lack of a distinctive addition to the costume.  Dirt on her boots?   Maybe some scorch marks on the outfit?  Any environmental cosmetic change would have been a positive addition at this point, not that the new face paint isn't welcome - it would just  be nice to have a figure that's more than improvement and instead offers something distinctive and unique, whatever that may be.

Hasbro did a good job giving the licensor/customer what it likely requested - but I would have liked to have seen a couple of additional enhancements or alterations to make this truly stand out.  At least it has a new portrait!