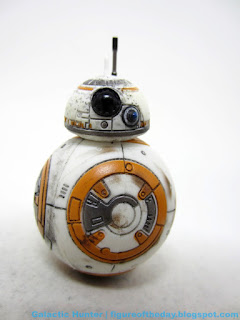 Bio: A skittish but loyal astromech, BB-8 accompanied Poe Dameron on many missions for the Resistance, helping keep his X-Wing in working order.  (Taken from the figure's packaging.)


Commentary:  The other three figures in this set had distinctive merits of their own, but BB-8 did not take C-3PO's path to improvement.  This is basically the same as the 2015 release, but with added dirt.  If you like increased battle-damage, you want this figure.  If you're happy with your existing BB-8, this does not bring anything new to the table. 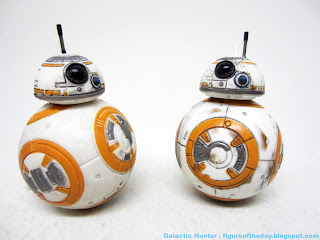 My sample has the same head, barbell, and body construction with the head being the only moving part.  It doesn't roll or anything like that, and the paint job is largely very similar with the tiniest bit of added panel detailing in  few spots.  I would have loved to see this are improved - this mold with a completely new paint job, or cast in shiny white plastic, would be compelling.  Instead, it's gone from kind of grungy to very grungy.  It's by no means bad, but it doesn't bring a lot new to the table and some of the orange paint applications on the bottom of the dome are a smidgen off on my sample. 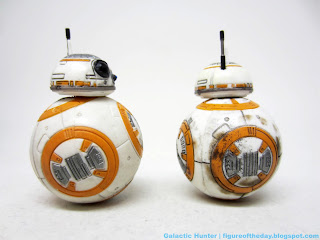 Positioning the head to find the gravitational sweet spot is just like before, and he's also just as white and as orange as last time.  I don't see any significant changes, so if you just want a 6-inch scale BB-8 you're probably better served getting the 2015 version with Rey as it's cheaper.  If you need all the versions - or the other droids in this set - you'll be glad Hasbro made enough deco alterations to this droid so you can tell it is indeed a different release on sight.  If Hasbro is so inclined, that would mean they could still do a clean BB-8 before turning in the mold.

I wish they would use magnets or something. That's all I want out of a 6in scale BB-8.